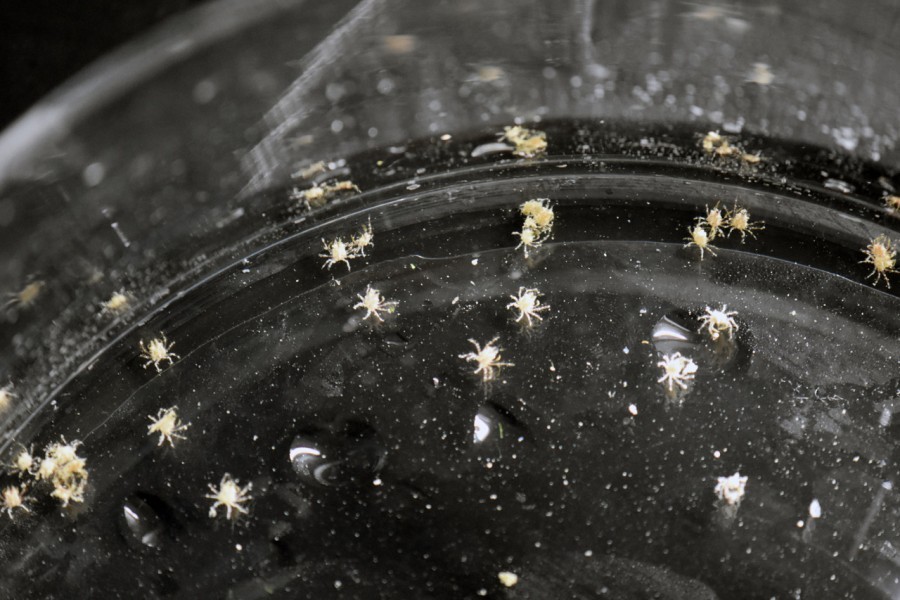 Scientists at Mote Marine Laboratory have taken a critical step toward diversifying efforts to restore Florida’s Coral Reef. In early February, Dr. Jason Spadaro, a Postdoctoral Research Fellow at Mote’s Elizabeth Moore International Center for Coral Reef Research & Restoration on Summerland Key, Florida, hatched Mote’s first clutch of Caribbean king crabs (Maguimithrax spinosissimus) as part of a project, funded in part by the National Marine Sanctuary Foundation to develop and refine aquaculture-based methods to build capacity for their production. These and successive clutches of juveniles will eventually be introduced onto Florida’s Coral Reef as part of the ongoing Mission: Iconic Reefs (M:IR) initiative led by the National Oceanic and Atmospheric Administration (NOAA) in partnership with Mote, and other organizations.

As a primary science contributor to M:IR, Mote is committed to resilience-based restoration strategies that apply a science-based approach on multiple fronts. While Mote is a long-standing pioneer and leader in coral restoration methodologies that are being used by coral restoration practitioners as part of M:IR, it now also stands at the forefront of mitigating algal overgrowth and seaweed dominance—both significant challenges to successful long-term coral restoration—by growing a program to bolster populations of a key reef herbivore, the Caribbean king crab.

Mote is a long-standing pioneer and leader in coral restoration methodologies that are a foundation of M:IR. However,  Mote is also committed to resilience-based ecosystem restoration strategies that apply a science-based approach on multiple fronts, and is now also positioned at the forefront of mitigating algal overgrowth and seaweed dominance—both significant challenges to successful long-term coral restoration—by growing a program to bolster populations of a key reef herbivore, the Caribbean king crab.

While reestablishing grazing functions on Florida’s Coral Reef has long been recognized as a  priority for ecosystem restoration, previous efforts by many organizations have had very limited outcomes. Dr. Spadaro is now in a position as a Mote Postdoctoral Research Fellow to translate his previous innovative research in the field, which has highlighted the Caribbean king crab, into real impacts to advance ecosystem coral restoration efforts in M:IR. “The potential for the Caribbean king crab to support coral recruitment and reef fish diversity has been demonstrated,” he said, “but the challenge is to establish aquaculture systems that support adequate levels of production and survival to support large-scale coral reef restoration.”

The project is a natural fit for Mote which, in addition to its work in coral health, disease, monitoring, and assessment, also has decades of experience in the development of innovative technologies for marine and freshwater aquaculture systems. “This project is a prime example of Mote’s focus on recruiting the next generation of the best and brightest minds in marine science and technology, like Dr. Spadaro, and our ability to address the broad range of stressors facing Florida’s Coral Reef,” said Mote President & CEO Michael P. Crosby. “There is no singular solution to the grave realities facing our coral ecosystems, so we must develop innovative science-based solutions that address the problem holistically.”

This work is conducted under permits FKNMS-2021-044 and SAL-21-2314-SCRP, and funding from philanthropic support for Mote’s Postdoctoral Research Fellowship program.