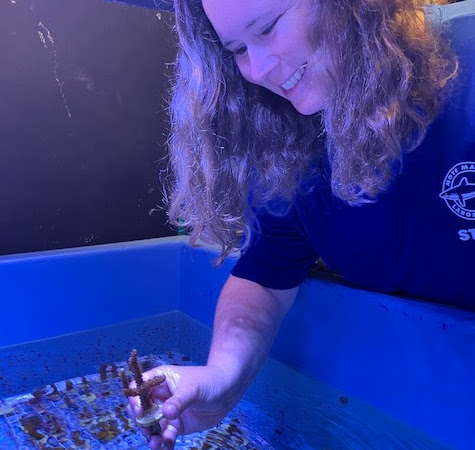 It's Coral Reef Awareness Week! Check out the newest coral research from Mote scientists who show you can take the coral out of the reef, but you can’t take the reef out of the coral.

As highlighted in new peer-reviewed research from Mote Marine Laboratory & Aquarium scientists, "Geographically driven differences in microbiomes of Acropora cervicornis originating from different regions of Florida's Coral Reef," staghorn corals from different locations in the Florida Keys kept a signature of their original collection location in their microbiome even after being in Mote’s coral nursery for several years.

Mote Postdoctoral Researcher Dr. Sara Williams led the study, analyzing the bacteria communities of Mote’s staghorn corals, Acropora cervicornis, used in restoration efforts along Florida’s Coral Reef. Corals host a large diversity of bacteria as part of their microbiome, a collection of bacteria, fungi and viruses that can influence how corals tolerate stressors. Understanding the microbiome of coral, according to Williams, is key in Mote’s restoration efforts on Florida’s Coral Reef because of its indication of resistance to disease as shown in previous research by Mote scientists.

According to the recent publication, even after being in the same nursery for years, staghorn genotypes—genetically distinct individuals—that originated from different locations on Florida’s Coral Reef have different bacterial communities. This can influence the resilience of the coral and ultimately the success of Mote’s restoration efforts.

"Our research highlighted in this paper provides a snapshot of the bacterial communities of over 70 staghorn genotypes held within Mote’s offshore nursery. We can use this information to make more informed restoration decisions based on what we have already learned about their microbiomes and disease resistance. It also suggests that when we source new colonies for use in our restoration pipeline, we should consider where they are coming from in the Florida Keys,” said Williams.

With their findings, Mote researchers also determined several genotypes from both the Upper and Lower Keys had more diverse microbiomes, and the rest of the genotypes were dominated by the bacteria genus Aquarickettsia, studied and first named by Mote Postdoctoral Researcher and co-author of the publication, Dr. Grace Klinges.

“Microbiomes of Acropora cervicornis differed by initial collection region and were mostly dominated by the putative bacterial parasite being studied by Dr. Klinges, but some genotypes from both the Upper and Lower Keys had more diverse bacterial communities which are associated with disease resistance,” said Williams. “Therefore, we should consider using those microbially diverse genotypes to restore areas repeatedly experiencing disease outbreaks or as parents for the next generation of coral babies we use in Mote’s restoration pipeline."

The publication was released in June of 2022.