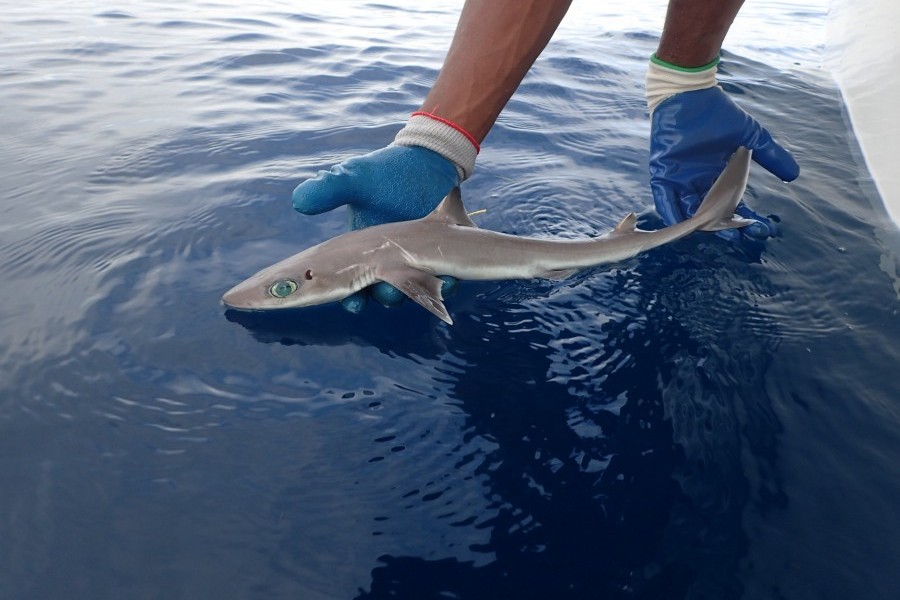 Dr. Eugenie Clark was a pioneer in shark biology, known around the world for her illuminating research on shark behavior. She was also a pioneer in another critical way, as one of the first women of prominence in the male-dominated field of marine biology.

Fondly labeled the “Shark Lady,” Clark founded Mote Marine Laboratory and continued studying fishes until she passed away in 2015 at age 92. She will now be recognized with another distinction: namesake of a newly discovered species of dogfish shark.

The species, named Squalus clarkae, also known as Genie’s Dogfish, was identified from the Gulf of Mexico and western Atlantic Ocean. The confirmation of this new species was reported this month in the journal Zootaxa (full article).

Before their findings, researchers labeled this species of dogfish shark Squalus mitsukurii. However, using new genetic testing and morphology, the study of an organism through physical appearance, they discovered and classified Genie’s Dogfish as a new species.

“Deep-sea sharks are all shaped by similar evolutionary pressure, so they end up looking a lot alike,” Daly-Engel said. “So we rely on DNA to tell us how long a species has been on its own, evolutionarily, and how different it is.”

“This type of research is essential to the conservation and management of sharks, which currently face a multitude of threats, from overfishing and bycatch to the global shark fin trade,” added Pfleger, marine scientist for the responsible fishing and sharks campaigns at Oceana. “Many fisheries around the world are starting to fish in deeper and deeper waters, and unfortunately, much less is known about many of the creatures that live in the deep. The first step to successfully conserving these species that live in deeper waters, like Genie’s Dogfish, is finding out what is down there in the first place.”

For Daly-Engel, the discovery goes beyond science.

At an early age, she was drawn to Clark and her books. As Daly-Engel advanced in her career, she saw Clark’s impact as one of the early members of the American Elasmobranch Society, a group Daly-Engel later joined and through which she met Clark.

“She is the mother of us all,” Daly-Engel said. “She was not just the first female shark biologist, she was one of the first people to study sharks.”

The feeling rings true for Pfleger, as well. “Dr. Clark was a trailblazer for women in shark biology. Her work showed me that it was possible to make my mark in a male-dominated field. This paper is a perfect example of how her career has influenced multiple generations of women in science: The first author is a woman who graduated from a woman-led lab.”

“Genie was aptly nicknamed the ‘Shark Lady’ because her shark research was so innovative and she was dedicated to teaching the truth about sharks," said Dr. Robert Hueter, director of the Center for Shark Research at Mote. “Not only was she responsible for establishing Mote’s legacy of more than 60 years in shark research, but also, her discoveries inspired people around the world to develop a sense of eagerness and passion for understanding and ultimately protecting these fascinating animals.”

As founding director of Mote Marine Laboratory, Clark was very familiar with the Gulf of Mexico. For a trailblazer in the world of shark biology, it is fitting that the new species of shark would be named after her, Daly-Engel said.

“Genie established Mote and she lived on the Gulf of Mexico coast,” she said. “She did a lot to advance our understanding of marine biodiversity there. So naming the dogfish shark from the Gulf of Mexico after her is the most appropriate thing in the world.”

About Florida Institute of Technology
Founded at the dawn of the Space Race in 1958, Florida Tech is the only independent, technological university in the Southeast. PayScale.com ranks graduates’ mid-career median salaries among the nation’s best. The university is a Tier 1 Best National University in U.S. News & World Report and is one of just nine schools in Florida lauded by the Fiske Guide to Colleges. Ranked among the top 5 percent of 18,000 degree-granting institutions of higher education worldwide in the 2018-19 World University Rankings and named one of just 14 U.S.-based Golden Age universities in 2018 by Times Higher Education, Florida Tech is one of the nation’s Best Value Colleges as determined by Forbes magazine in 2018. Florida Tech offers undergraduate, master’s and doctoral programs. Fields of study include engineering, science, aeronautics, business, mathematics, cybersecurity, psychology, space sciences, humanities, communication and education. Find additional information at www.fit.edu.