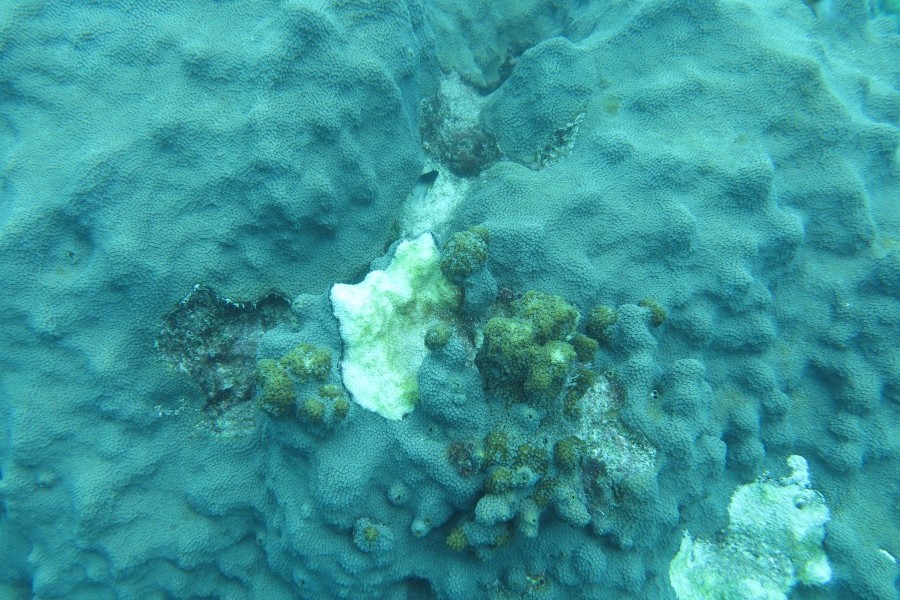 A controlled lab study led by Mote Marine Laboratory and published June 1 in the peer-reviewed journal PLOS ONE revealed that black band disease was less deadly to mountainous star coral (Orbicella faveolata) as water acidified, or decreased in pH. 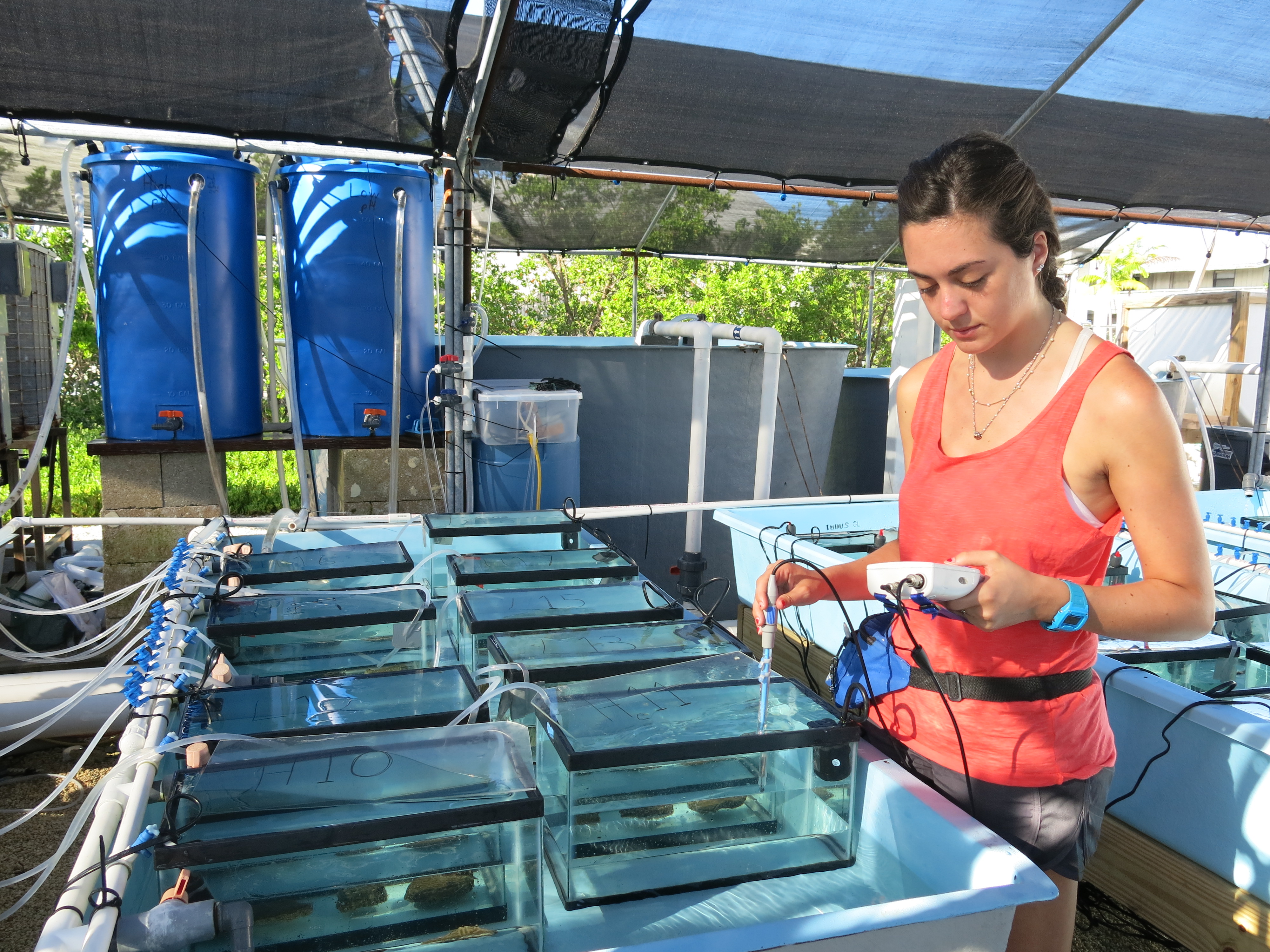 Nicole Leporacci, who co-authored the current research paper as a student from the University of Rhode Island, measures water quality during the experiment on black band disease. Credit Dr. Erinn Muller/Mote Marine Laboratory.

The ocean’s pH is decreasing through the process of ocean acidification (OA) driven by excess carbon dioxide, the same greenhouse gas driving temperature increases worldwide. OA may weaken or dissolve corals’ hard skeletons and cause other changes in multiple marine species. Warming water stresses corals, causing them to lose the vital algae in their tissues. Coral diseases, another major threat, may worsen in corals stressed by warming water temperatures, but few studies have examined how these diseases could change amid low pH levels expected with OA.

The new study is the first to examine how low pH water affects black band — a fast-progressing, often deadly, worldwide coral disease affecting at least 42 coral species in the Caribbean alone. Affected species include mountainous star coral, a major contributor to the reef system of the Florida Keys and listed as threatened under the U.S. Endangered Species Act.

Black band, a variable group of multiple bacteria species, forms a dark circle that spreads across a coral, killing it. 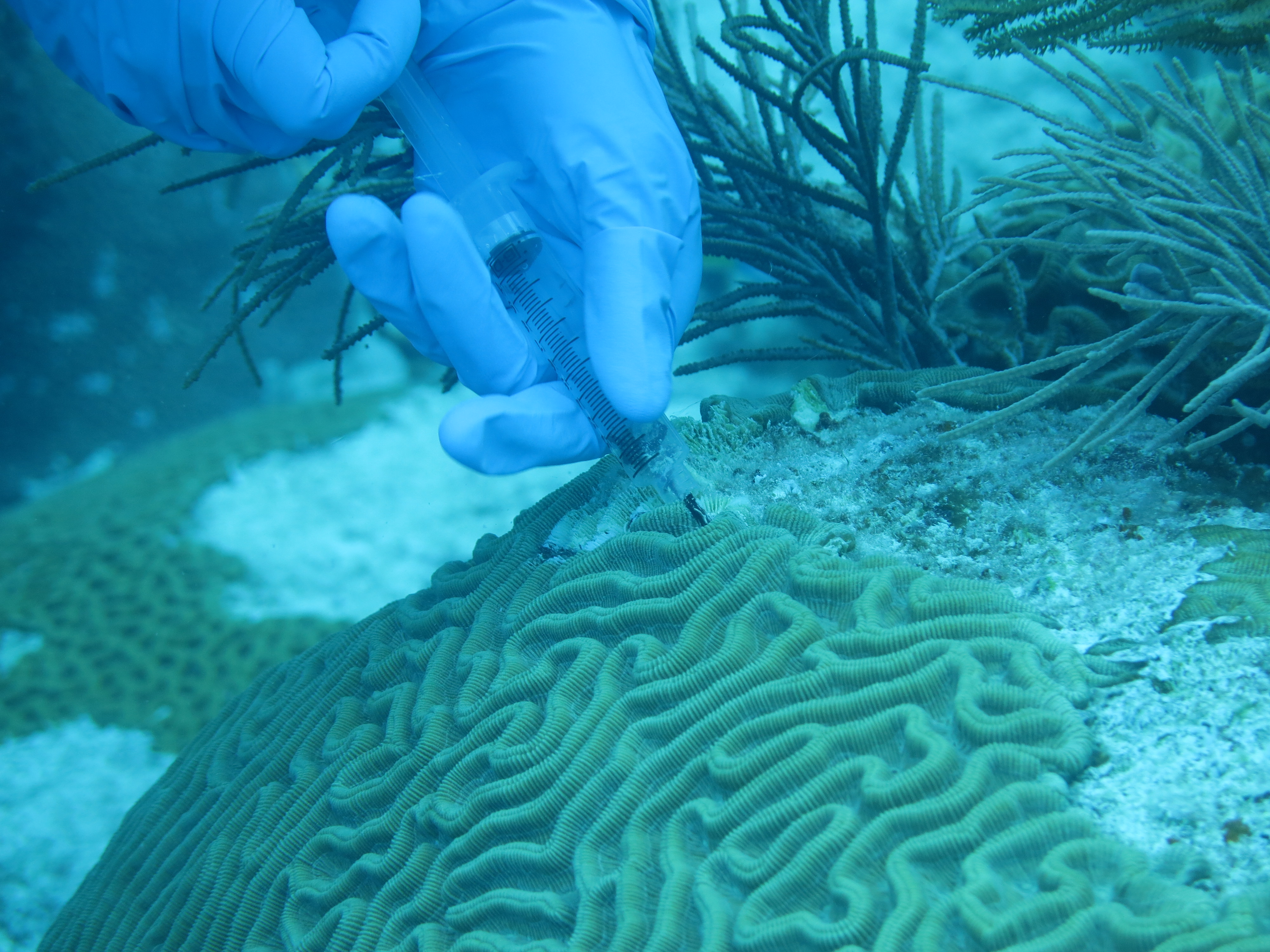 At a very small scale, black band produces a lower pH environment than its surroundings — localized acidification. “In the lab, we thought that exposing an infected coral to acidified water would accelerate the virulence of this disease, but to our surprise, the opposite happened,” Muller said.

During 2013 lab work at Mote’s Summerland Key campus, the researchers inoculated 32 mountainous star coral fragments with black band disease, placing some in tanks with temperature and pH similar to present-day ocean water, and others into tanks with elevated temperature, lowered pH or both — using year-2100 projections from the Intergovernmental Panel on Climate Change’s Fifth Assessment Report.

“These experimental studies in the lab are extremely important — they give us a glimpse into the potential future for our reefs,” said Mote’s Ocean Acidification Research Program manager, Dr. Emily Hall. She oversees research in Mote’s Ocean Acidification Flow-through Experimental Raceway Unit on Summerland Key, which was established thanks to an NSF grant. “With ocean acidification, not every organism is affected the same way. It’s important for managers of marine protected areas to know how the impacts might vary.”

The researchers carefully monitored the water conditions and photographed and measured the coverage of black band for 16 days; by then, some coral fragments had perished completely from the disease. The team sampled black band bacteria and the corals' natural resident bacteria — some of which contribute to the coral immune system — and sequenced their 16S rRNA gene, which helps classify bacteria into scientific categories.

Their analysis revealed a surprise:

“Though warmer temperatures didn’t significantly affect the progression of black band disease in this time period, the low pH treatment did — it slowed the progression rate of the disease by 25 percent,” Muller said. “It took us awhile to believe it.”

“Black band disease has a very distinct consortium of microbes, and it seems that lowered pH affected different microbes in different ways,” said study partner Dr. Kim Ritchie Associate Professor at the University of South Carolina at Beaufort. “The abundance of one significant member of the consortium went down.”

Specifically, acidified water reduced the abundance of Oscillatoriophycidae, a class of cyanobacteria that often dominates black band disease. These bacteria carry pigments that give the disease its distinct color. Though these bacteria live in the already-acidified environment of black band, past studies by others suggest that cyanobateria can decline if the water becomes acidified beyond their tolerance limits.

“There were also shifts in the corals’ own microbial community, but none that explained the change in the disease,” Muller said. “What happened in the black band itself, a reduction in the main contributor to the disease consortium, was likely a better explanation.”

“One of our next steps is to study how low pH influences the very small scale conditions in the microenvironment of black band disease as the outside environment changes,” Muller said.

The researchers also seek to expand and replicate the study in more facilities, with more detail, longer timeframes, more coral species and more diseases. No single lab study can simulate all the complexities of projected ocean acidification impacts, but important advances are on the horizon. Mote opened its new Elizabeth Moore International Center for Coral Reef Research & Restoration (IC2R3) in May 2017 on Summerland Key, Florida. This 19,000-square foot facility includes new labs for enhanced ocean acidification research, thanks in large part to a donation from the Alfred and Ann Goldstein Foundation, which allowed Mote to establish its Alfred Goldstein Institute for Climate Change Studies.

In the field, Muller and others are investigating possible methods to control the spread of black band on wild corals.

The new PLOS ONE study benefited from the hard work of interns in the NSF Research Experiences for Undergraduates program and Mote's extensive college internship program. Through the study, University of St. Andrews undergrad intern Keir Macartney co-authored his first peer-reviewed journal article and found new directions for his career.

“My experience with Mote drove me toward coral reefs; it was awesome,” said Macartney, a diver now earning his doctorate from the University of New Hampshire, studying sponges on deeper-water reefs. With two summers of work on the PLOS ONE study, Macartney articulates the clear take-home message:

“Ocean acidification will still have negative impacts ecologically, but it may not destabilize reefs in exactly the ways we expect,” Macartney said. “Considering how the microbial communities changed in this study, I think ocean acidification can do things that will really surprise us.”