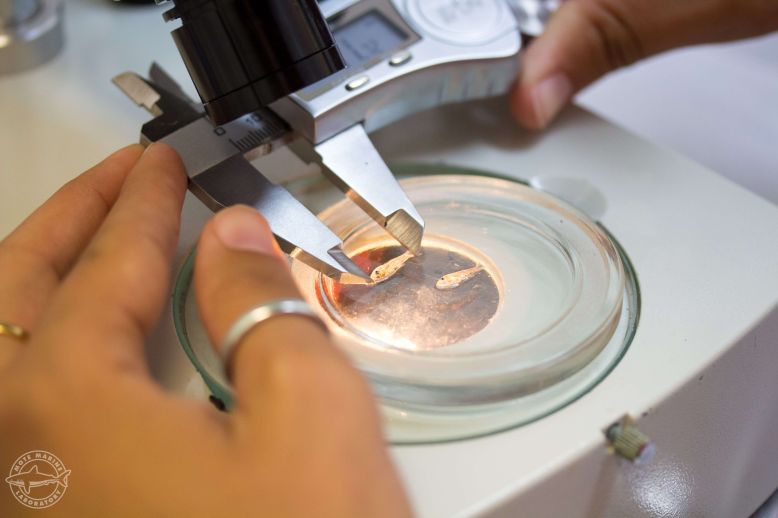 A new peer reviewed study led by Mote Marine Laboratory scientists was the first to highlight the benefit of adding two probiotic strains of Bacillus bacteria during the rearing of common snook, a popular Florida sportfish. Groups of snook larvae (babies) that received the probiotic in their feed and aquatic environment (water) had 2.5 times higher survival rates than those that did not receive it.

Probiotics are bacteria that help the well-being of the host animal, in part by protecting against bacterial pathogens. Probiotics can produce enzymes for better digestion, modulate the immune system and enhance the immune response against harmful bacteria. Today, the use of probiotics in commercial fish farming (aquaculture) aims to improve fish survival, growth and reproduction through addition to the water and/or feed.

The new peer-reviewed study, published in the Nature Research journal Scientific Reports, also revealed that those fish given the probiotic early in the rearing process better resisted the stress of being transported as juveniles. High mortality in the delicate larval and juvenile stages is a bottleneck in the commercial-scale production of many marine fish species. Identifying beneficial bacteria strains that improve survival during this critical developmental period and decrease stress during transport has tremendous potential for commercial application in aquaculture.

“These larval mortality ‘bottlenecks’ are pretty common in marine fish — in the literature you can see reports of up to 99 percent larval mortality in some species,” said Mote Staff Scientist Dr. Andrea Tarnecki, first author of the study. “A big issue is that the larval survival can vary a lot — you might have two groups of fish being reared in tanks beside each other, both from the same spawn, and one might do well and the other might not. Those differences are common, and we wondered how bacteria might be influencing those groups of fish.”

Tarnecki worked with Marzie Wafapoor of Northeastern University, Remy Phillips of the University of Florida, and Mote Staff Scientist Dr. Nicole Rhody to test the strains of Bacillus by adding them to the fish feed and water, or the water alone.

During two trials in 2015 and 2017 involving hundreds of thousands of snook larvae, the researchers evaluated a suite of physical, physiological and immunological parameters, comparing groups given the probiotic bacteria and those reared without them. The study was funded by Florida Sea Grant and used snook raised at Mote Aquaculture Research Park in eastern Sarasota County, Florida as the model species.

Partners examined the microbiome — the various, associated microscopic life forms — of the snook and their saltwater tanks in detail. “Typically other studies have looked at bacteria sampled from the fish or their aquatic environment, at one point in time; we sampled both the fish and the water, conducting a full microbiome analysis during the course of the probiotic administration, so we could see the whole transition of the microbial community,” Tarnecki said.

The two trials each found a statistically significant difference in the percent of fish surviving between probiotic and control groups at about 30 days following hatch from eggs. Most notable, fish treated in 2017 had 2.5 times greater survival than controls, on average.

To test how the larvae survived transport — an expected step in commercial fish farming operations — Mote scientists put 500 fish from each treatment into bags of oxygenated water and drove them in vehicles for about half an hour to simulate land-based transport. Probiotic-treated fish had approximately 10 percent higher survival than controls immediately after transport and 20 percent higher one week after.

To identify the groups of bacteria in samples from the fish and water, study partners isolated and analyzed a specific stretch of DNA that varies among different bacteria. In treated systems, the scientific family Bacillaceae was dominant but decreased over time, likely representing the probiotic. Its decrease doesn’t necessarily mean that benefits to the larvae will also diminish, if the probiotic aided their healthy development.

“We know the probiotic is providing a physiological benefit because we see higher survival following transport, and we could see the presence of the probiotic in the microbiome, but what was fascinating was, the microbiome didn’t otherwise change that much,” Tarnecki said. “That told us we have to look in different places to see how it’s working.”

The benefit wasn’t explained by size differences in the larvae or by changes in the activity of three innate immune system enzymes measured in the study. It’s possible that other immune components benefited, a topic that future studies will investigate. “We also want to look at the development of the gastrointestinal tract of the fish to see whether it might be affected by the probiotic and look at what digestive enzymes are present at what age,” Tarnecki said.

It’s also possible, but not confirmed, that certain potentially harmful bacteria in the system were inhibited or the water quality was improved by adding the probiotic. “One of the hypotheses we’re continuing to investigate is that the probiotic might be settling in the ‘biofilm’ (bacterial layer) on the sides of the tank,” Tarnecki said.

While Mote scientists raise snook for studies on replenishing wild fisheries, their research may translate to improved methods for raising fish for food in a commercial-scale aquaculture operation. “The success of probiotic supplementation in aquaculture appears to be dependent on fish species and size, as well as the feeding management strategy,” Rhody said. The next steps would be to see if these probiotic strains provide any benefits during the production of Florida pompano and almaco jack, two high-value food fishes raised at Mote Aquaculture Research Park.

In general, probiotics are a critical part of improving commercial aquaculture. A 2016 report from the United Nations Food and Agriculture Organization emphasized a challenge that many farms — including fish farms — work to avoid today: Drug resistant bacterial diseases that trump existing antibiotic treatments. Scientists are investigating probiotics as one tool in a growing toolbox of alternatives to traditional antibiotic substances.

The study authors thank Mote’s Marine & Freshwater Aquaculture Research Program staff for producing and rearing snook for these experiments, Mote’s Dr. Ryan Schloesser for assistance with statistics, and Mote interns and volunteers for their multiple contributions.