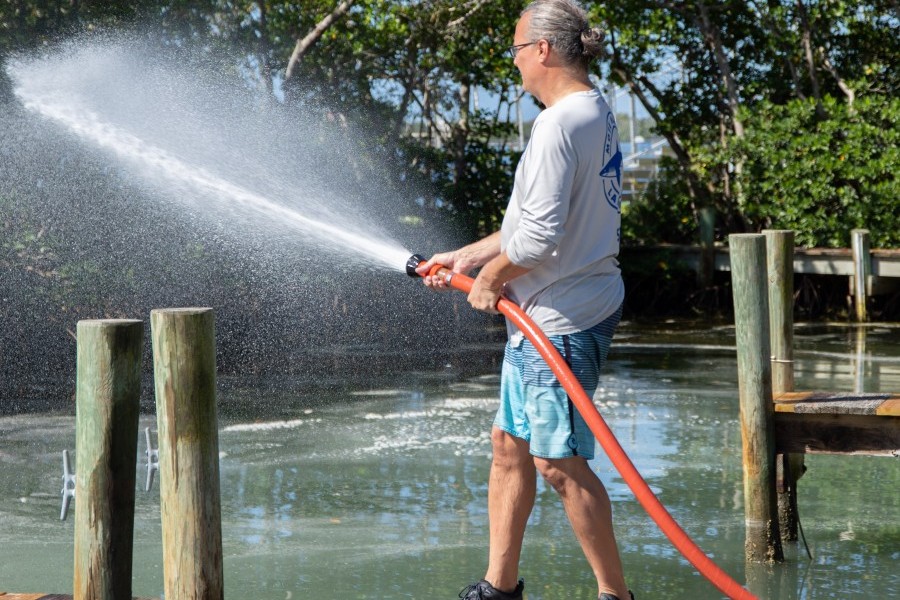 A bloom of Florida red tide, patchy and persistent since December 2020, has recently increased in severity in Tampa Bay, Sarasota Bay and along the coast from Pasco to Sarasota counties, causing respiratory irritation at local beaches and widespread fish kills. The Florida Red Tide Mitigation & Technology Development Initiative, led by Mote Marine Laboratory & Aquarium in partnership with the Florida Fish and Wildlife Conservation Commission, is developing the tools and technologies to mitigate red tide and decrease the impacts on the environment, economy and quality of life in Florida. During the first two years of this six-year Initiative, over 25 projects are already underway.

One of those projects includes a partnership of scientists from Mote Marine Laboratory & Aquarium (Mote), Woods Hole Oceanographic Institute (WHOI) and University of Central Florida (UCF). In response to the current bloom event, these researchers have come together to rapidly deploy and test the ability of clay dispersal to remove cells and toxins, a mitigation strategy used in other settings around the world to control other types of harmful algae blooms (HABs).

Florida red tides are caused by the overabundance of cells of native species of algae, Karenia brevis. Clay mitigation involves spraying the surface of the water with a slurry of modified clay particles and seawater, and as the dense clay particles sink they combine with red tide cells. This process can kill the cells and also bury them in the sediment on the seafloor. For a more thorough description of this process, known as clay flocculation, see below.

“The Initiative is focused on a multi-tiered approach to developing mitigation strategies,” said Kevin Claridge, Vice President for Sponsored Research & Coastal Policy Programs at Mote and serving as the Administrator for the Initiative. “Although we have many Initiative projects in different stages of research and development, we’re excited to be able to conduct one of our first field tests to work through logistical hurdles and gauge the effectiveness of a treatment option in a real-world situation, with actual red tide present in a water system.”

"This is just the first of what we hope will be several upcoming trials of clay flocculation on active blooms in the wild," said Dr. Don Anderson, Senior Scientist at WHOI and Principal Investigator for this Initiative project. “What we learn here will help us better understand how conditions in Florida affect its success and how clay flocculation might be tailored to blooms of Karenia brevis, as well as other species of algae, here and elsewhere in the world.”

“In addition to cell abundance and toxin concentration, our team is evaluating phytoplankton community composition as well as multiple water quality measurements before, during and after the clay application to determine the success of cell and toxins removal as well as the impact on other water column parameters,” said Dr. Vince Lovko, Co-Principal Investigator and Senior Scientist at Mote.

Dry clay material was mixed with seawater to create a slurry, which was then dispersed over the water in the study area with hoses. A screen was placed into the water on one end of the canal, and water samples were taken on both sides to compare the treatment area with non-treated areas.

“As we’re looking for mitigation strategies for red tide, we’re not only looking at the water quality impacts of treatment options, we’re also looking for potential impacts on the benthic and fish communities,” said Dr. Kristy Lewis, co-Principal Investigator and Assistant Professor in UCF’s Department of Biology, National Center for Integrated Coastal Research.

“Florida is really leading the way in the United States in utilizing decades of red tide research and monitoring to deliver innovative technologies that can be deployed to decrease the impacts of the HABs in our environment, economy and quality of life,” said Mote President & CEO, Dr. Michael P. Crosby. “We’re still in the early stages of this six-year Initiative, yet we’re already able to have early-stage technology ready to rapidly deploy for field testing. That’s the power of science, and how by bringing together the best and brightest minds, we can create solutions to help our communities.”

Special thanks to the Sarasota Outboard Club and the City of Sarasota for allowing access to the canal where this work took place.

See up to date conditions at local beaches at visitbeaches.org.

How does clay flocculation work?

When sprayed as a slurry on the surface of the water during an algal bloom, the tiny but dense clay particles will “flocculate” or combine with other particles in the water, including the red tide cells. The process of flocculation is common in drinking water and sewage treatment. As these aggregations, known as “flocs,” grow, they sink through the water until they reach the bottom. As these flocs fall, they capture additional particles, clearing the water as they descend. In some cases, as with the fragile cells of the Florida red tide organism Karenia brevis, the flocculation and sinking process can rupture cell membranes, killing the cell. In deeper water, darkness, prolonged contact with the clay, and eventual burial in sediments on the seafloor can also kill the algae cells.

In studies of the Florida red tide organism Karenia brevis and related HAB species, clays have been very effective in removing cells from the water with no re-emergence up to 48 hours after clay control experiments in the laboratory, suggesting that the cells are either dead or incapable of escaping from the clay floc.

This study also assesses the amount of clay needed and the ability of the clay to remove the toxins from red tide-impacted water. In researching mitigation strategies, scientists are focused on not only the removal of cells, but also removal of the toxins produced by the  red tide organism.  Determining the fate of red tide toxins, as well as the cells is an essential aspect for evaluating the ability of the products and/or processes we are testing to mitigate the adverse effects of red tides.

Read more about the use of clay in HAB mitigation here.