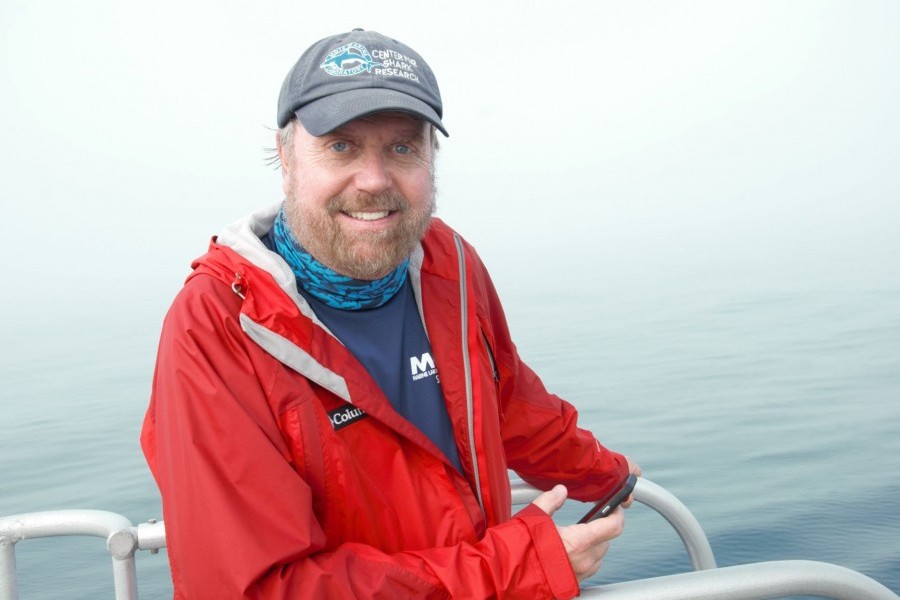 Hueter’s shark research has spanned six of Earth’s seven continents, and lately he is best known for
trailblazing work in Cuba—including satellite-tagging the first sharks in Cuban waters—and the U.S., where he has combined his roles as Mote Senior Scientist and Chief Scientist for the nonprofit organization OCEARCH to lead groundbreaking studies of great white sharks.

Over the years, the exceptional research led by Hueter and his team has included: sweeping surveys of sharks along Florida’s Gulf Coast to document long-term changes in their populations; a satellite-tagging study of record scope with whale sharks, Earth’s largest fish species, that documented their migrations spanning over 5,000 miles; through collaborative expeditions with OCEARCH and partners, successfully tracking 70 great white sharks with satellite transmitters and proposing a model of their life history and migrations in the Northwest Atlantic; leading field research identifying nursery areas for 16 shark species in the Gulf of Mexico; and groundbreaking studies on intensive shark fishing in Mexico’s Gulf of California that documented 160,000 sharks and rays in the fishery over years. He also played leading roles in: providing the first scientific documentation of a shark nursery area in Cuban waters, for the lemon shark; gaining new insights on sharks caught in northwest Cuba’s open-water longline fishery; documenting shark bycatch to support development of fisheries electronic monitoring systems in the Gulf of Mexico; contributing data and expertise to massive, global studies of shark-fishery interactions, reef shark conservation and declines; and more.

As a project leader, Hueter has managed approximately $20 million in research grant funding at Mote. His leadership has been instrumental to creation of the National Shark Research Consortium and the Pelagic Ecosystem Research Consortium, and over the years he also served as: President of the American Elasmobranch Society (1993)—the international-level, professional society for those who study sharks and related fishes; an Academic member of the National Oceanic and Atmospheric Administration’s (NOAA’s) Highly Migratory Species Advisory Panel (1997-2021); and Board member of the Economic Development Corporation of Sarasota County (2004-2010).

Hueter advanced the incredible tradition of Mote shark science that began with the Lab’s Founding “Shark Lady,” Dr. Eugenie Clark, and he held the first Perry W. Gilbert Chair in Shark Research at Mote, following in the footsteps of his mentor and former Mote Director Dr. Perry Gilbert. In his role as leader of Mote’s shark research, Hueter significantly expanded Mote’s capabilities for working on these large marine animals, including construction of Mote facilities focused on shark visual testing, feeding mechanisms and multi-sensory integration.

With his gift for communicating science and conservation to the public, Hueter raised awareness of shark finning in the U.S. through national media beginning in 1989, and he has shared a wealth of knowledge with the world ever since, through diverse programs ranging from ABC’s Good Morning America and CBS’s 60 Minutes to Discovery Channel’s Shark Week and NPR’s All Things Considered. He has helped the news media and public to sort fact from fiction when discussing countless shark topics, including cases of incredibly rare but sometimes fatal shark bites.

Always open to collaborate with conservation-focused fishers, Hueter worked with Southwest Florida recreational anglers to create the world’s first all-release shark tournament for research, Mote’s science-focused Gulf Coast Shark Census, from 1989-1998, and he co-organized or contributed to several other all-release tournaments that contribute to research.

Hueter has also worked to guide the next generation of scientists by serving on doctoral and master’s student supervisory committees at 16 academic institutions.

Although now retired from Mote employment, Hueter is not retiring from science. In his role as Senior Scientist Emeritus, he will continue to advise the next generation of shark scientists at Mote and communicate science to the public, from a modest office on the City Island campus and his home office in Sarasota, where he and his wife Allie will continue to reside. And for the next few years, Hueter will be working about half-time as OCEARCH Chief Scientist, organizing and running expeditions to unravel mysteries of the great white shark.