Fall 2020 updates from the scientists and divers who explored “Green Banana,” a blue hole deep in the Gulf of Mexico

Check out the introduction below, and then scroll down for new posts from the scientists and divers each week!

In September 2020, scientists undertook one of their deepest and most challenging missions yet into the Gulf of Mexico’s blue holes—underwater caves, springs and sinkholes being explored for their unique biology, chemistry and structure.

Dr. Emily Hall of Mote Marine Laboratory is leading the ongoing blue hole study, which took divers 350 feet deep into a site called “Amberjack Hole” earlier this year. Then the team refocused on  an even-deeper expedition to the site “Green Banana,” where dives reached deeper than 400 feet. Mote’s Jim Culter pioneered the scientific exploration of the Gulf’s blue holes, working with highly skilled volunteer technical divers, and Culter is joining Hall and others to take the exploration to new levels.

In the current project, Mote scientists are working with Florida Atlantic University’s Harbor Branch Oceanographic Institute, Georgia Institute of Technology, and the U.S. Geological Survey to deploy cool technology—a heavy framework called a benthic lander carrying sensing and sampling gear—into these offshore holes and gather new data on their chemistry, life forms, and other features. Team members want to know how these offshore blue holes might influence the Gulf of Mexico and whether they might even have underground connections to the Floridan Aquifer.

Project partners sincerely thank the National Oceanic and Atmospheric Administration’s Office of Ocean Exploration and Research for the grant that supports this project.

The second exploration of Amberjack hole was a success! The last time we visited Amberjack hole was during Florida’s dry season. This time we hoped to gain a new perspective by visiting during the summer wet season, and boy did Florida deliver on the wet! Hurricane Dorian came through the first week we proposed to explore Amberjack hole, so the trip was postponed. Then, some impending thunder storms and rough seas poised to postpone the trip again. Luckily, the rough seas subsided, and we were able to get out on the water for our second exploration.

Day 1 was a big day for the Benthic Lander. It was deployed to the bottom of Amberjack hole and programmed to record data and take sediment pore water samples until its recovery the following day. Divers helped lower the instrument down into the hole, and Dr. Jim Culter, a scientist and deep sea technical diver was able to retrieve two sediment cores from the base (350ft down). This is exciting because the data from these sediment cores and benthic lander will be used to study the unique water column and sediment chemistry at the base of these holes.

Day 2 was all about the divers. Divers went down to conduct biological surveys around the rim using GoPro cameras. This footage will later be used to identify species and their abundances and to compare to the biodiversity recorded on the last trip. Divers also retrieved water samples at predetermined “stations” that were collected in transects from the rim outward in three directions. Once the samples were brought on board the scientists went to work, processing the samples for later analyses of nutrients, carbonate chemistry, and phytoplankton and microbial abundances. In addition, Dr. Chris Smith from USGS obtained samples to measure levels of radon and radium.

On Day 3 we obtained a water profile by taking samples from the surface above the hole down to the bottom at 10 meter intervals. This required some serious muscle, as all samples were taken with hand lowered niskins bottles that were attached to ropes. That meant every samples had to be pulled back up manually, even from 350 ft!

What’s next is to analyze all this new chemical and biological data so that we can better understand what’s happening in these systems and how they are impacting the surrounding Gulf waters. Then start looking forward for our next trip in September 2020 to a new blue hole called “Green Banana”. 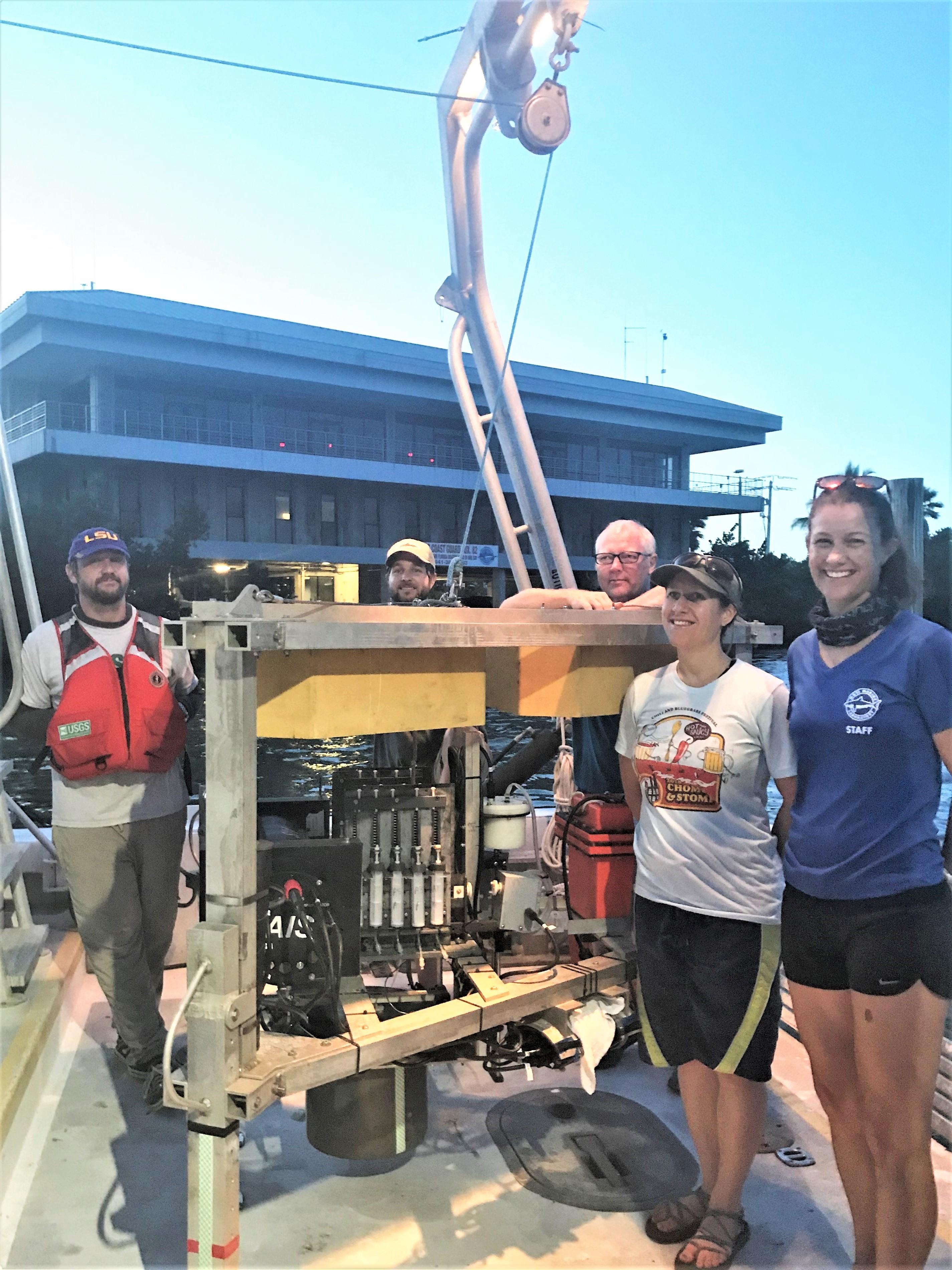 The first exploration of Amberjack Hole has come to an end! It was an incredible experience to work alongside the scientists, divers, and marine operators that made this trip possible.

Looking back, there were definitely some ups and downs; watching the benthic lander sink into the abyss on its way down to Amberjack hole for the first time was definitely a highlight! Hanging over the side of the boat seasick on my first day out at sea definitely was not.

Our planned first trip out to Amberjack hole was Monday, May 13, however, bad weather and high seas forced us to postpone to Tuesday, May 14. But everyone hit the ground running those next two days. Between Tuesday and Wednesday, the benthic lander was deployed and then retrieved, water samples were taken in and around Amberjack Hole and processed for a variety of chemical and biological parameters, and sediment cores and microbial samples were retrieved from inside the hole by divers.

Remember the benthic lander is a giant framework containing many scientific instruments for both sediment and water analysis; it is 5  feet wide, 6 feet tall and weighs over 600 pounds. Moving it anywhere is a feat, but with the collaboration of scientists, deep divers and marine boat operators aboard the research vessel Eugenie Clark, it was deployed off the boat, through the hole's opening and 350 feet down to the ocean floor!

Research vessels went out an additional two times that week to deploy the benthic lander a second time as well as take some biological surveys of the diverse marine life. Data from the biological surveys, especially of any endangered or commercially important species, will be given to the appropriate agencies and may provide evidence for the need for future conservation of these areas.

In the coming months the labs at Mote Marine Laboratory, Florida Atlantic University, Georgia Institute of Technology, and U.S Geological Survey will work on processing all the abundant data obtained this week and use it to start to create a picture of these unique Gulf of Mexico Ecosystems.

May 8, 2019: Preparing for our deep dive into Florida’s blue holes 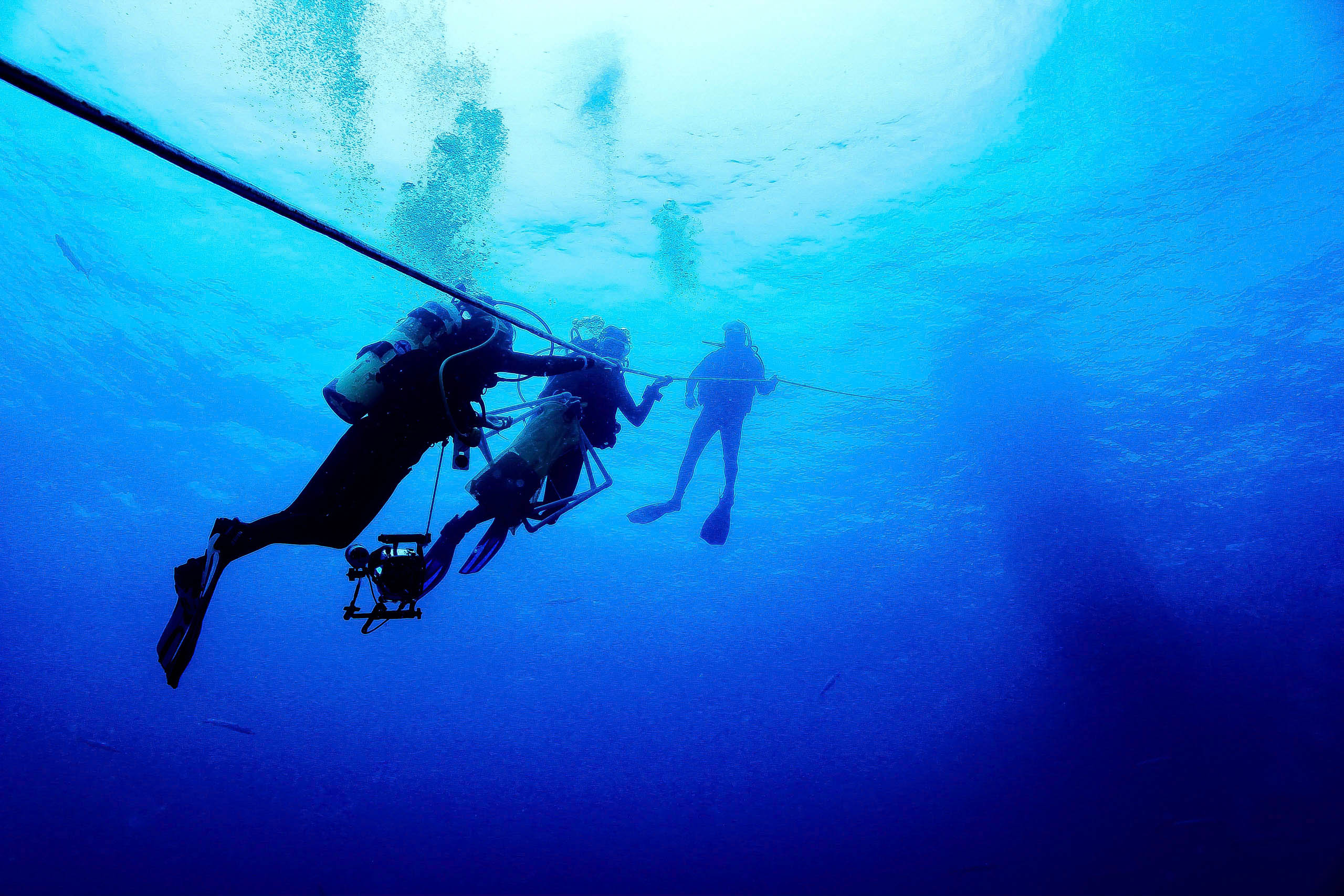 Photo: Past dive into a Florida blue hole. Credit: Conor Goulding/Mote Marine Laboratory.
A new round of dives will explore these mysterious environments more deeply.

In just a few days, Mote Marine Laboratory scientists will set out on a week’s worth of research cruises to explore a unique, scarcely studied, underwater landscape on the West Florida Shelf — one whose impact on the Gulf has yet to be characterized but is likely very important — Florida’s blue holes.

Most of us have heard of sinkholes on land, but did you know that sinkholes also exist in the ocean floor? Underwater sinkholes, springs and caverns are “karst” (calcium carbonate rock) features that are scattered across Florida’s shelf floor; they vary in size, shape and depth, but most are ecological “hot spots,” oases in the relatively barren seafloor.

If you are lucky enough to dive down to one of these blue holes, you will see a diverse biological community of marine species swimming around you and spread out across the sea floor. Then as you swim away from the rim of the blue hole, the seafloor will evolve from a coral landscape with sponges, mollusks and other benthic (bottom) dwellers to a seagrass meadow. As you get farther and farther away, the seagrass will give way to a relatively barren sea floor.

These blue holes are clearly supporting communities of marine fauna and flora, so it’s important and downright fascinating to understand why — what these unique areas have to offer that sustain these populations. That is one of question that sparked the interest of a small group of scientists at Mote Marine Laboratory, Georgia Institute of Technology, Florida Atlantic University, and the U.S. Geological Survey.

Part of the reason blue holes have evaded regular scientific exploration is their location. The opening of a blue hole can be hundreds of feet down, where only very experienced technical divers can reach, and the openings are often too narrow for automated submersibles. In fact, most reports of blue holes have come from fishermen and sport divers, not from scientists or research cruises.

However, that’s all about to change as Mote gears up for this interdisciplinary exploration of one blue hole, named “Amberjack hole” after one of the fishes found above these habitats frequently.

Some exploratory questions the researchers intend to answer are:

Are these submersed sinkholes connected to Florida’s ground water? Is there potential for groundwater intrusion into the Gulf or saltwater intrusion into Florida’s groundwater?
Is there any reason to suspect a particular bluehole is secreting nutrients and thus affecting primary production? (“Primary producers” are life forms that use sunlight energy to build nutritious, complex carbon molecules and other compounds consumed by different living things in the ocean’s food web.)
Do microenvironments harbor unique or new species of microbes? (Microbes include bacteria and other microscopic life.)
Is the site likely to become a protected area?

They will use an array of scientific methods and instruments to answer these questions, including a “benthic lander,” a large, multipurpose instrument that will be lowered by scientific divers to the base of Amberjack hole and will measure pore water nutrients and fluxes of various chemicals across the sediment-water interface.

Chemical signatures, radon and radium isotopes, will help scientists investigate whether there is fresh water from the Florida Aquifer making its way out into the Gulf through Amberjack hole. If blue holes are connected to groundwater through pathways underneath the continental shelf, then these shelf features could be a point source of land-based nutrients to the Gulf and a newly discovered source of primary productivity; and conversely, there could be potential for seawater intrusion up into the ground water with storm surges and sea level rise.

A second component of the exploration will include benthic surveys, during which divers will swim around and record the sea life present at the rim of the blue hole and above the hole in the open pelagic zone. The abundance and diversity of some species, especially protected species like whale sharks, sea turtles and commercially important fishes, will be documented and given to appropriate agencies. If there is enough abundance and biodiversity of life in these habitats, they may be considered for marine protection.

More blog posts will follow, outlining this exciting research and the scientists aboard the RV Clark as the exploration gets under way. 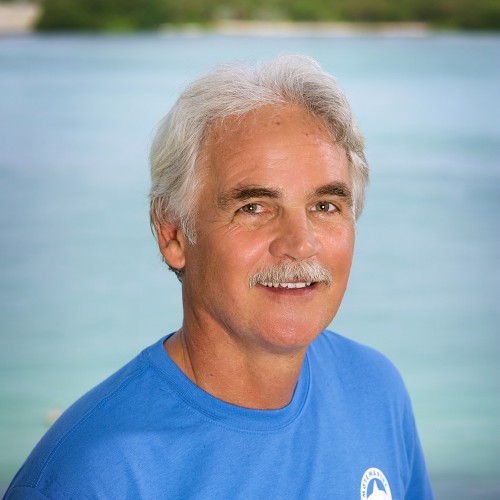 Following the explosion of the Deepwater Horizon Oil Rig in the Gulf of Mexico in 2010, Mote scientists gathered baseline samples and assisted the NOAA Mussel Watch program.