Aerial surveys: The Manatee Research Program has a long history of conducting low-level aerial surveys to count manatees and other wildlife. Our current staff has a combined 20+ years of aerial survey experience, having conducted aerial projects over many of Florida’swaterways. The use of GIS is central in maintaining our sighting databases, analyzing survey data, and producing cartagraphic documentation of manatee distribution, habitat use patterns, trends in counts.

Surveys around Florida Power & Light Company power plants have been done for almost four decades by former and current MRP staff. Counts have exceeded 2,500 manatees on a single survey day of several plant locations, and for Cape Canaveral Next Generation Energy Center discharge and nearby waters in Brevard County, single day counts have approached 2,000+ manatees on several occasions.
Sarasota County surveys have been done for well over 30 years. The surveys have shown year-round habitat use patterns and trends in abundance of manatees. The surveys also highlight locations where human activities and manatee habitat use might be in some conflict, thereby providing information to inform proactive management decisions.

MRP staff have participated in the yearly, statewide manatee aerial surveys organized by the Florida Fish and Wildlife Research Institute since the 1990s.

Photo-identification surveys: MRP staff have conducted photo-identification surveys in waters of the south-central west coast of Florida for over 25 years, and in more recent years in southeastern Florida. Florida manatees can be identified using scars and mutilations on their trunks, flukes, and flippers that are acquired from incidents such as collisions with boats, lesions from cold stress, and entanglement in fishing gear. The process of photographing individual manatees and documenting them over time (photo-ID) provides a gold mine of information on manatee behavior and ecology, habitat use, life history (reproduction, mortality) and other factors necessary to optimally understand and conserve manatees. One of the primary uses of the photo-identification data is to generate regional adult survival estimates, which then translate into insights about population status and trends.

Genetic sampling: MRP staff have genetically sampled manatees in southwestern Florida since 2006. In that time, the MRP developed a unique skin scraping tool that takes a small sample of skin with minimal reactions from manatees. MRP staff also collaborate with the Florida Fish and Wildlife Conservation Commission (FWC) with yearly biopsy sampling events during the colder winter months. Genetic samples are used for many purposes including determining paternity, sex, and as a mark-recapture tool.

UAS facilitated research: The MRP initiated a pilot/proof of concept study in 2018 to assess the efficacy of Unmanned Aerial Systems (UASs) for obtaining counts and documenting the distribution of manatees at winter sites in comparison with concurrent conventional aerial surveys. The UAS, flying at an altitude of 300-500 feet, produced high quality video from which counts and distribution of animals could be analyzed, producing similar results obtained by fixed wing-surveys. Manatees were not disturbed by, nor did they react to, the UAS during the trial.

In winter 2021-2022, MRP staff, in coordination with other federal, state and non-profit agencies and organizations, conducted UAS surveys to observe body condition and behavior of manatees in order to identify animals in need of rescue. These surveys centered on the Indian River Lagoon, located on the east coast of Florida, a region that has been experiencing significant ecological issues, including a 96% loss in mean seagrass coverage. The loss of forage has resulted in an Unusual Mortality Event, or UME, in which hundreds of manatees have died from starvation since winter December 2020.

The use of UASs in marine mammal research is still relatively new, and government organizations overseeing protected species have taken a cautious approach on the permitting of their use. Studies such as the ones conducted by the MRP, as well as other organizations around the globe, have shown UASs offer a safe, cost effective, and non-invasive method for conducting research. The MRP plans to employ the use of UASs in other aspects of their research, including photo-identification and behavioral studies.

Captive manatee research: The MRP is in the fortunate position of having access to two husbandry and research trained Florida manatees. The resident manatees at Mote, Hugh & Buffett, are worldwide the only manatees trained for the participation in behavioral and physiological research. They have participated in numerous studies on manatee sensory systems, such as visual acuity, tactile sensitivity and audition.

In the context of their routinely performed husbandry and medical training the manatees have learned to stay at a target for up to more than 30 minutes. This trained behavior allows veterinarians and scientist to perform health exams and measurements, such as skin temperature or heat flux, without causing stress in the animals. The training of Hugh and Buffett, and of all other mammals and reptiles at Mote Marine Lab, is based on positive reinforcement.

Satellite tagging: MRP staff have conducted or collaborated on multiple research projects involving manatees fitted with satellite tags over the last 20+ years. These projects include behavioral and habitat use studies of manatees in southwestern and southeastern Florida.

PREVIOUS AND OTHER RESEARCH EFFORTS

Warm-water springs: MRP staff have been involved in projects to assess manatee use of springs that could potentially be opened to provide improved protection of manatees during winter cold. Some recent efforts have involved Sulphur Springs, Ulele Spring, Lithia Spring, and of course, Warm Mineral Spring, for which selected restoration could provide a long-term, industry independent source of warm water for hundreds of manatees in southwestern Florida.

Thermal biology: One of the major threats to Florida manatees is cold stress. Cold Stress Syndrome (CSS) affects and kills Florida manatees in winter when water temperatures decrease below ~69°F. CSS symptoms include (but are not limited to) immune suppression, organ failure, lesions of heart, skin and other organs, eventually causing the death of the animal. The MRP has conducted studies aimed at: 1) identifying environmental, physiological and morphological parameters that may influence Florida manatees’ susceptibility to cold stress, 2) developing preventive measures against CSS, and 3) identifying indicators for early diagnosis of CSS. The understanding of basic principles of manatee thermoregulation has been enhanced owing to investigations in the two trained resident Florida manatees at Mote, Hugh & Buffett, and through cooperation with Tampa’s Lowry Park Zoo and Homosassa Springs Wildlife State Park.

Dr. Reynolds often collaborated with Dr. Dana Wetzel, director of the Environmental Laboratory for Forensics (ELF) at Mote Marine Laboratory, on projects that examined levels and long-term sublethal effects of stressors (noise, contaminants, cold stress, disease) on significant biological functions in manatees and other marine mammals and fish globally. Their collaboration also resulted in the development of biomarkers for the determination of the sex of sturgeon at a very young age; a fact of considerable value to the caviar industry around the world 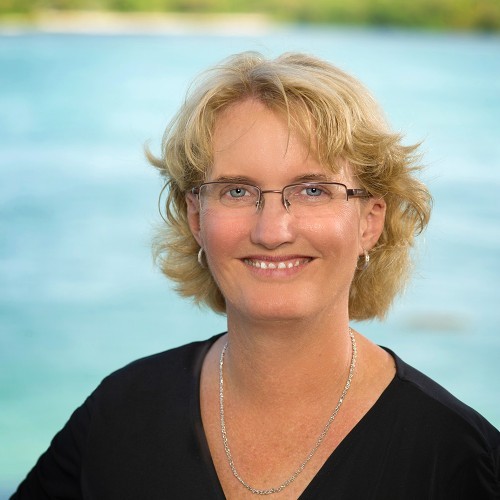 The number of manatees occupying Florida waters stands at something around 6,250.