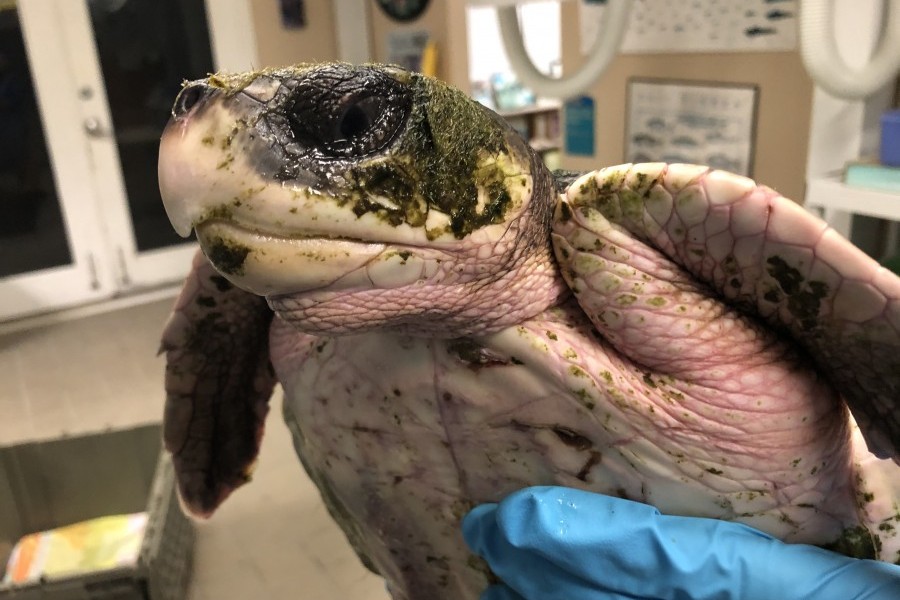 On Saturday, Nov. 21, Mote staff traveled to the St. Pete-Clearwater International Airport to pick up some unusual passengers—several Kemp's ridley sea turtles, traveling in their own personal banana boxes, in need of critical care.

The turtles are victims of what is referred to as "cold stun." As ectothermic (commonly called "cold-blooded") animals, sea turtles are not able to regulate their body temperatures on their own, and when they find themselves in too-cold water, they become lethargic. This can be potentially fatal as their body functions slow down, leaving them susceptible to predators and boat strikes, allowing for algae to grow on their backs, and more.

As cold fronts and cooler water temperatures set in in the New England region, rehabilitation facilities become inundated with cold-stun cases that far exceed their capacity. Sea turtles are then transported to other facilities for care, including Mote Marine Laboratory and other Florida sea turtle rescue facilities, in a coordinated effort among multiple state wildlife agencies and rescue facilities. While all the sea turtles arrived to Mote in extremely critical condition, supportive care—including fluids increased water temperatures, and a little TLC—usually results in a speedy recovery.

The six cold-stunned turtles in Mote's care have been nicknamed: Art, Blue Spruce, Fraser, Douglas, Canaan and Noble. Their profiles will be listed and updated at mote.org/hospital.

Kemp's ridley sea turtles are considered endangered by U.S. Fish and Wildlife Service (USFWS) and Critically Endangered by the International Union for Conservation of Nature and Natural Resources (IUCN). Kemp's ridley sea turtles are generally considered the most endangered species of sea turtle, with threats to their population including rising temperatures, degradation of habitat and nesting areas, and entanglement in and ingestion of marine debris.
Check out the behind-the-scenes action in this 90 second clip!