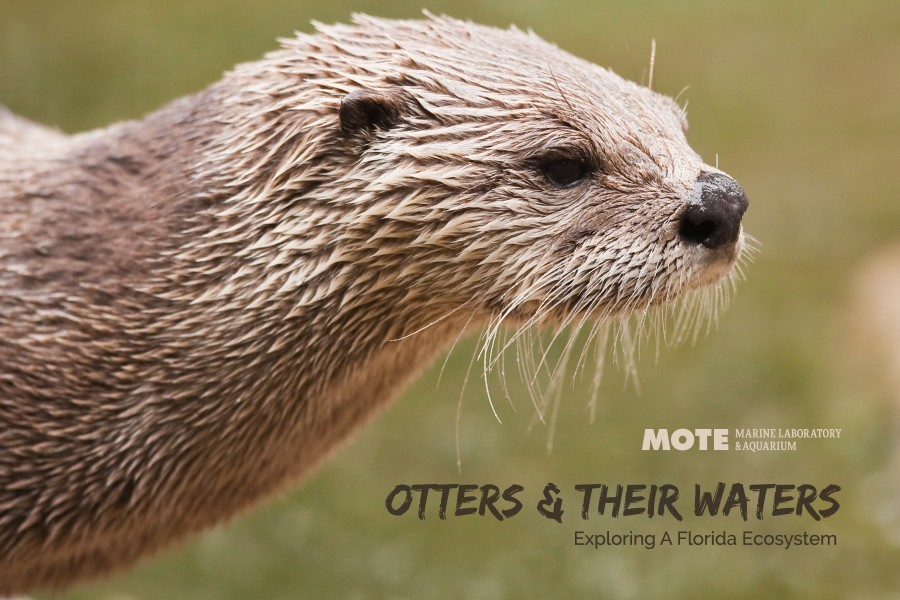 Mote Aquarium is excited to announce that “Huck,” “Pippi” and “Jane” are the three North American river otters that will be featured in Mote’s special exhibit “Otters & Their Waters,” opening in February (exact opening date to be announced).

Male otter Huck and female Pippi were named through a public poll conducted in late December on Mote’s Facebook, Twitter and Instagram. Approximately 300 users chose names from a list of orphaned literary characters — a nod to the fact that these otters were orphaned at a young age and raised by wildlife rehabilitators. The third otter is a female named Jane.

The otters arrived in late December to their temporary home behind the scenes at Mote, where caregivers are now preparing them to live in their public exhibit. The otters are eating a protein-rich diet including meat and fish. Mote's Aquarium biologists plan on training the otters in basic behaviors such as going to a target — a way to lead them to specific locations as needed — coming when called and staying put at a certain location. The otters will also learn behaviors that will allow Mote staff to provide them excellent health care, such as presenting parts of their bodies for checkups or entering a crate to be weighed.

(Members of the media will be invited to visit the otters during a special preview in the days before the exhibit opens. Please watch for Mote’s upcoming announcement.)

Huck was found in September 2015 by a veterinarian in Melbourne, Fla. He was 5 months old and appeared to have issues using his hind legs.He was people-friendly, suggesting he might have been hand-raised. He received a veterinary checkup, and within days his hind leg issues seemed to be gone. No other health problems were found. Huck weighed 23.5 pounds upon arrival at Mote. Because he was used to people, he was not a good candidate for release into the wild. Huck, Jane and Pippi are all too tame to be released, and they will serve as ambassadors for their watershed homes at Mote.

Jane was rescued in spring 2015 and came to Mote from an animal rehabilitation facility in Conway, S.C. At the time of rescue, she was about 4-6 weeks old weighed about 2.3 pounds. She weighed 10 pounds on arrival at Mote.
Jane and Pippi, raised at the same facility, enjoyed a diet that started with Gatorade (a source of electrolytes) and otter formula. At 8-10 weeks, they were weaned on a protein-rich diet including scrambled eggs, ground turkey and more, ultimately eating fish and crab meat. Next came whole, fresh fish. They learned to swim in a bathtub and then a larger pool. Jane is more dominant than Pippi and loves to play in her sandbox.

Pippi was rescued in spring 2015 and came from the same Conway, S.C.-based facility as Jane. At the time of rescue, she was believed to be a week to 10 days younger than Jane and weighed 2.1 pounds. She weighed 7 pounds on arrival at Mote. Pippi is more shy and calm than Jane, with darker coloring around her face.

“Otters & Their Waters” will feature these three animals and provide an otter’s-eye view of their watershed homes. Watersheds — lands that drain water toward rivers, estuaries and the sea — are important to people and myriad wildlife, including river otters, their prey and many animals from land to the coastal oceans where Mote Marine Laboratory scientists carry out their research. At the exhibit, Mote’s animal care specialists will work with the otters and educate guests during narrated training sessions.

This will be the latest of several special exhibits at Mote, following on the successes of “Penguin Island,” “Sea Lions: On the Water’s Edge,” “Survivors” and “Oh Baby! Life Cycles of the Seas.” (“Oh Baby!” remains open.)

Mote is an independent, nonprofit marine science institution dedicated to today’s research for tomorrow’s oceans, and the Lab and its public Aquarium educate hundreds of thousands of people every year, helping the public become more ocean-literate.

“Otters & Their Waters” will be open during normal hours, 10 a.m.-5 p.m. seven days per week, at Mote Aquarium, 1600 Ken Thompson Parkway in Sarasota, Fla. The exhibit will be located at Mote’s Ann and Alfred Goldstein Marine Mammal Research and Rehabilitation Center.

Please watch Mote’s web site and social media for upcoming announcements revealing the February opening date of the exhibit and special events that will celebrate its arrival.