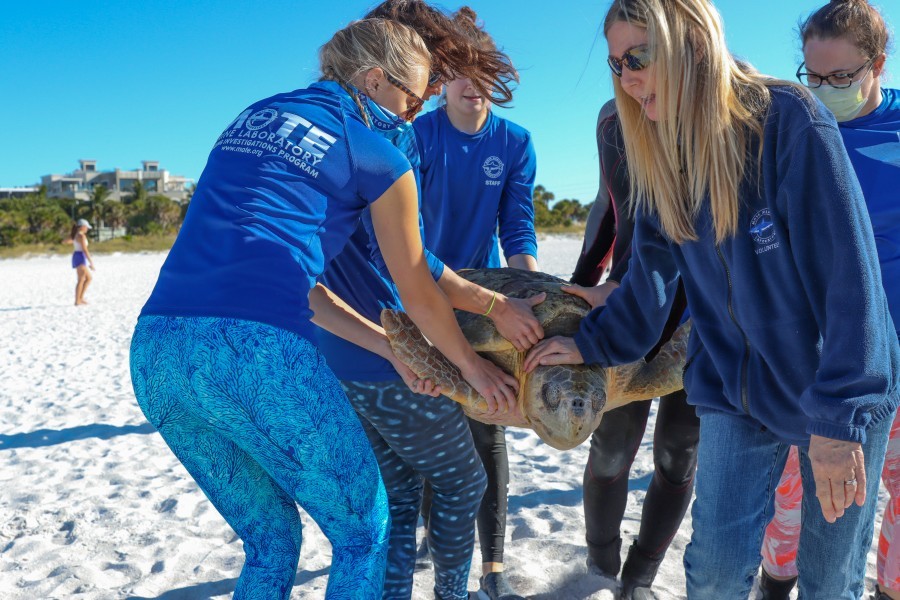 On the last day of November, Mote Marine Laboratory & Aquarium sent off our loggerhead patient Rosemary. Rosemary was found stranded on the beach near Manasota Key Road in Englewood on October 29, 2021. Examination showed that Rosemary was suffering from exposure to Florida red tide toxins. Interestingly, her carapace showed evidence of a past boat strike that had since healed.

Sea turtles can be affected by the brevetoxins created during red tides by swimming in affected waters or by ingesting prey that has been contaminated. Rehabilitation of animals affected by brevetoxin is generally successful if the animal is reached in time. Clean water, air and food, alongside supportive care and a watchful eye, quickly puts animals on the path to recovery.

Rosemary received medical treatment for just over a month. This treatment included subcutaneous fluids and antibiotics which were lessened as her condition improved.

When responding to sea turtle patients suffering from Florida red tide, time is of the essence. Members of the public are highly encouraged to call Mote’s Stranding Investigations 24/7 hotline at 888-345-2335 anytime atypical behavior is observed from sea turtles, manatees, dolphins or whales. Learn more about this program here.

Learn more about the other patients currently in Mote’s care at mote.org/hospital.