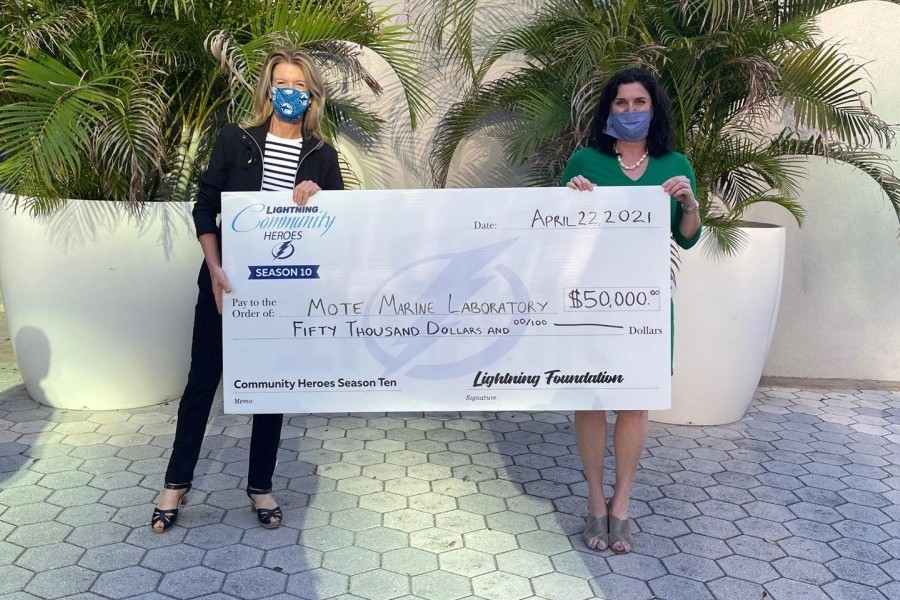 The Tampa Bay Lightning honored Elizabeth Moore, Mote Trustee and the namesake of Mote's Keys campus, the Elizabeth Moore International Center for Coral Reef Research & Restoration, as the 24th Lightning Community Hero this season during the first period of April 22's game against the Columbus Blue Jackets. Moore, who received a $50,000 donation from the Lightning Foundation and the Lightning Community Heroes program, presented by Jabil, will donate the money to Mote Marine Laboratory & Aquarium.

Since relocating to Florida 12 years ago, Moore's positivity impacted several Tampa Bay Area non-profits including Mote Marine Laboratory& Aquarium. Mote is a research institution dedicated to conservation and the sustainable use of our oceans. She personally owns and operates an 1,100-acre property near the Myakka River basin and allows students to access her land for environmental research.

Moore becomes the 435th Lightning Community Hero since Jeff and Penny Vinik introduced the Lightning Community Hero program in 2011-12 with a $10 million, five-season commitment to the Tampa Bay community. Through April 22's game, in total, the Lightning Foundation has granted $22.7 million to more than 750 different nonprofits in the Greater Tampa Bay area. During the summer of 2016, the Viniks announced that the community hero program will give away another $10 million over the next five seasons.