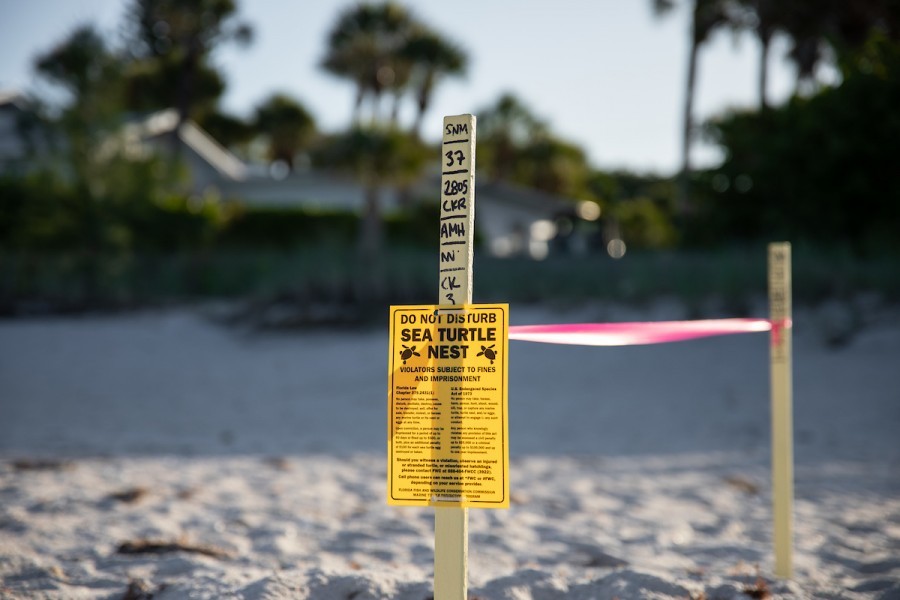 The first sea turtles have officially landed on the shores of Sarasota County this past weekend. On April 24, Mote Marine Laboratory & Aquarium’s Sea Turtle Conservation & Research Program (STCRP) documented the first nest of the season at the southern end on Longboat Key.

While sea turtle nesting season is officially May 1 to Oct. 31, STCRP began monitoring 35 miles of beaches from Longboat Key to Venice for nesting earlier this month under permits issued by the state.

During and in the weeks leading up to nesting season, sea turtles will swim just offshore of southwest Florida’s coast to mate before the females come ashore to nest, and by early summer the first hatchlings will venture into Gulf waters.

Last year, a total of 3,786 nests were counted by STCRP, making 2021 the fourth highest count in Mote’s 40 years of monitoring. This year, Mote hopes for another successful season for our region.

However, for female sea turtles and their hatchlings, nesting isn’t as simple as it sounds. Some of their largest obstacles include light disorientation and trash on the beach.

On nesting beaches, light from waterfront properties can disorient nesting female turtles and their young, which emerge at night and use dim natural light to find the sea.

“The most common reason of why a sea turtle ends up in the wrong place is because there is artificial light(s) on in that direction or at that location,” said Macksey. “They use light to navigate to the water. The females use it to find the water at the end of nesting and the hatchlings use it for the first time they emerge from the nest.”

Beach furniture and trash can also impede sea turtles and their young.

“The best thing you can do is leave the beach as natural as you can,” said Macksey. “The majority of nesting turtles in our area are loggerheads, but green sea turtle numbers continue to increase. As Sarasota County is home to the densest loggerhead nesting population in the Gulf of Mexico, success here is important to the overall population. Everyone can do their part to help our turtles have a successful season.”

Mote encourages coastal residents and visitors to keep the beach turtle-friendly with tips on our website at mote.org/2022nesting. Weekly new nest numbers are also posted here, which allows media and members of the public to follow along throughout the season. Numbers are updated weekly by end of day Monday.