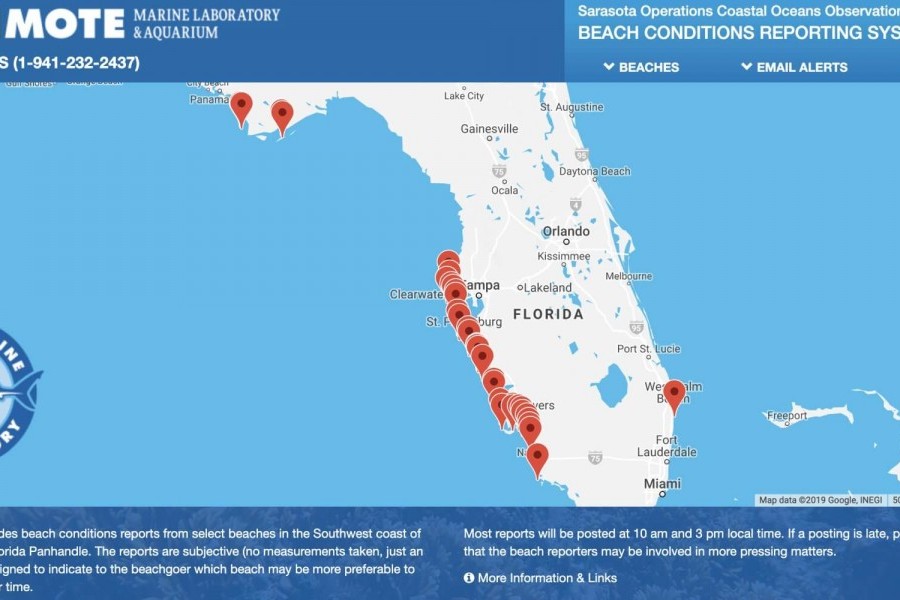 In May 2019, Lake Worth Beach became the first site on Florida’s Atlantic Coast to join Mote Marine Laboratory’s Beach Conditions Reporting System — a public, online resource developed on Florida’s Gulf Coast to help visitors choose the best beach on a given day.

The Beach Conditions Reporting System (BCRS) provides daily updates on waves, currents, water and air temperature, algae and multiple other conditions at 38 beaches, including Lake Worth and 37 Gulf Coast beaches in Southwest Florida and the Panhandle. Each beach is monitored by trained volunteers including lifeguards, park rangers and others coordinated by Mote.

“The BCRS has become a go-to website and app, especially during algal blooms, hurricanes, and major beach events such as volleyball tournaments,” said Dr. Tracy Fanara, Manager of Mote’s Environmental Health Program, who oversees the BCRS. “We have received many messages through the BCRS asking us to add East Coast beaches.”

Many beachgoers check the BCRS for impacts of Florida red tide, a type of harmful algal bloom that normally occurs in the Gulf but occasionally reaches Florida’s Atlantic Coast — which it did during the past year. Florida red tide toxins can kill fish and cause beachgoers to cough and sneeze.

“The BCRS protects public health and tourism by showing visitors and residents that, even though some beaches may have red tide effects, there are other options, including other beaches on the Gulf Coast or the East Coast,” Fanara said. “By encouraging visits to those beaches without effects, we hope to ensure a positive and healthy Florida beach experience. The more beaches we add, the better it is for beachgoers and businesses.”

Mote’s BCRS data feed into the Gulf of Mexico Coastal Ocean Observing System, which provided grant funding to help BCRS expand its coverage. Continuing to expand and maintain the BCRS network also depends on funding support from counties and cities whose beaches are listed.