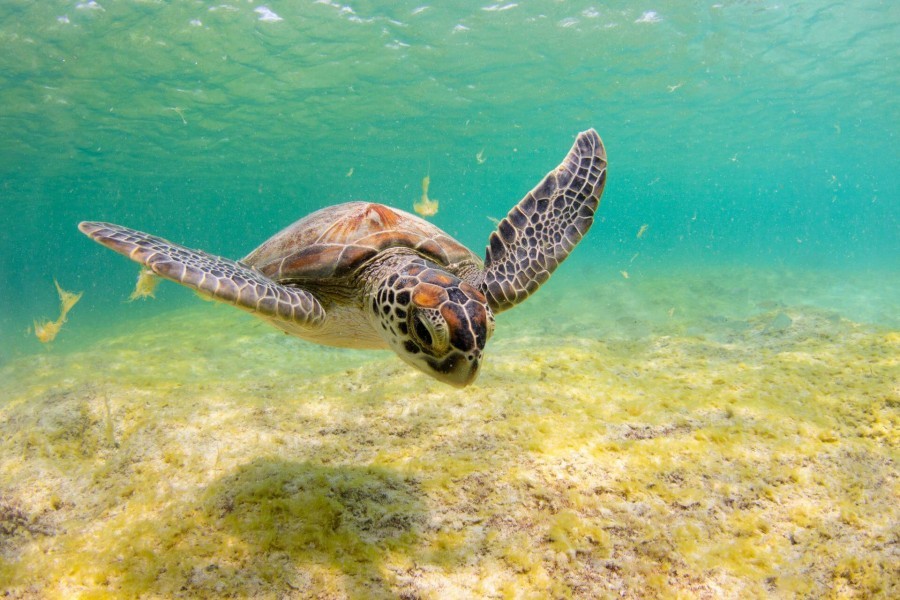 Contest winner Carol Bishop named the turtle Cecil, in honor of her mother. Thanks to Carol for her support of Mote's sea turtle research.

From now through August 9, members of the public can support Mote Marine Laboratory’s Sea Turtle Conservation & Research Program (STCRP) while also getting the chance to name a satellite-tagged green sea turtle.

Mote sea turtle biologists have tagged seven green sea turtles with satellite tags, allowing researchers, and the public, to follow their movements when they leave the beach after nesting. Six of the seven turtles have been named, and Mote wants help naming the last turtle!

Supporters can make a gift now through August 9 to be entered for a chance to name the turtle.

Enter the gift amount and type “TURTLE” in the “Donor Comments” box.

After August 9, a winner will be selected at random. Winner will be contacted via email and given the opportunity to name the tracked sea turtle.

If you are unable to make a gift, but would still like the chance to name the tagged turtle, please send your name, address and phone by email to info@mote.org and include “Turtle Tag” as the subject line.

Mote’s STCRP is responding to extremely high numbers of nesting sea turtles in the Sarasota area. This highly productive nesting season presents a special opportunity to study and protect a threatened species of great interest: green sea turtles.  Mote’s STCRP has tagged seven green sea turtles with satellite transmitters this year — a new annual record for Mote’s work with this species and a source of critical data for conservation and management.

“We’re using satellite tags to get a better understanding of where green turtles nest, how many times they nest in a season, where they go in between nests, their migratory routes and their foraging grounds — where they go after nesting season ends,” said Senior Biologist Kristen Mazzarella in Mote’s STCRP. “This species is newer to Florida’s Gulf Coast, so getting this information is critical to better understanding the behaviors of green sea turtles on our coast and what areas they utilize to inform wildlife management agencies.”

To track the turtle that will be named, visit mote.org/seaturtletracking and look for the turtle marked as “Name Me” on the green sea turtle tracking map. To learn why tracking matters, read this story about the first four green turtles Mote tagged this summer.