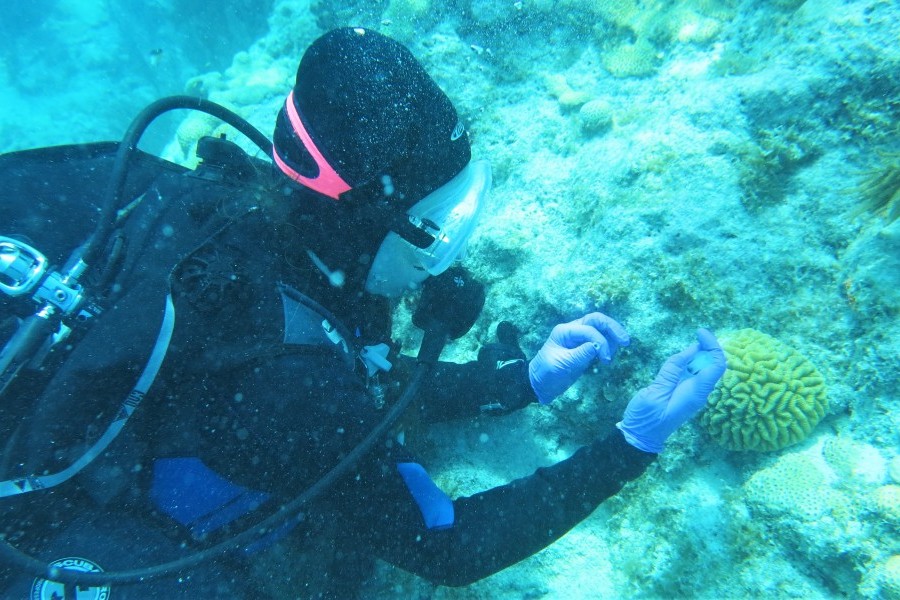 New research on stony coral tissue loss disease reveals similar “bacterial signatures” among sick corals and nearby water and sediments for the first time. Results hint at how this deadly disease might spread, and which bacteria are associated with it, on Florida’s Coral Reef.

This study is only the second peer-reviewed publication focused on characterizing the community of bacteria (the bacterial “microbiome”) associated with these sick corals—a critical effort because the disease is believed to be caused by one or more bacterial pathogens.

Study authors hail from the University of Miami (UM), National Oceanic and Atmospheric Administration (NOAA), Mote Marine Laboratory (Mote) and the Florida Fish and Wildlife Conservation Commission (FWC) Fish and Wildlife Research Institute. The project was supported by a grant from the U.S. Environmental Protection Agency and by NOAA’s ‘Omics Initiative.

Stony coral tissue loss disease has spread like wildfire through more than 90% of Florida’s Coral Reef since 2014 and reached several Caribbean sites recently. It represents one of the most urgent and devastating challenges affecting brain, maze, boulder, star, pillar and other slow-growing coral species that form the very foundations of Florida’s Coral Reef. The disease can form hotspots of more than 140 kilometers (87 miles) at once and spreads at a persistent pace, with mortality rates of 66-100% on the most highly susceptible species.

Studying the disease is essential for saving a threatened natural treasure: Florida’s Coral Reef, also known as the Florida Reef Tract, provides more than $8 billion in economic impact, attracting visitors, protecting coastlines from major storms and supporting diverse life including fisheries. However, Florida’s Coral Reef has lost all but 5% of its living coral cover in recent decades and is struggling to survive amid the growing pressures of multiple diseases, climate change impacts (increasing water temperature and ocean acidification), pollution and more.

So far, studies suggest that stony coral tissue loss disease involves one or more bacterial pathogens carried in water and possibly sediments. Laboratory studies are working toward identifying the pathogen(s) and one previous field study identified five bacteria families associated with the disease lesions on wild corals—but none were found across all four coral species examined, and the study didn’t focus on how the disease is transmitted to new corals. Until now, studies on disease transmission took place in laboratories or used existing data to make inferences—for instance, comparing water-current speeds with movement of the disease front.

“We had two big questions in this paper: One, could we try to detect which bacteria are associated with this disease, and two: Can we find those bacteria in the sediment and seawater, since these are two hypothesized sources of this disease?” said the paper’s first author, Dr. Stephanie Rosales, Senior Research Associate with NOAA and UM, who analyzed bacterial genomic data from the field sampling effort conducted by Mote and FWC scientists.

“To date, no other published paper has looked at the bacteria in water and sediment samples in context of stony coral tissue loss disease,” said study coauthor Dr. Erinn Muller, Science Director for Mote’s Elizabeth Moore International Center for Coral Reef Research & Restoration (IC2R3). “There has been evidence of this being a waterborne pathogen, from experiments in the lab putting diseased and healthy corals in same tank. We don’t have direct evidence of how the disease is transmitted out in nature, and if sediments are involved in that transmission, but our past research has suggested that this disease is moving at speeds consistent with bottom water currents and the sediments they carry.”

Clark led the effort to extract DNA from the samples and make copies of one specific gene (segment of DNA) for analyses: the 16S rRNA gene, which is commonly used as a marker to classify bacteria into groups. Rosales then used statistical analyses to compare the bacterial microbiome associated with each set of environmental samples—including each individual species of coral and the water and sediment—across all three zones.

“We found that Rhodobacterales and Rhizobiales, two groups of bacteria, were associated with the disease lesions,” Rosales said, noting that these groups (orders) of bacteria were less prevalent in healthy corals or healthy sections of infected corals. “This doesn’t necessarily mean they are the primary pathogens but suggests they may be important. We also found them in the sediment and water, with Rhodobacterales elevated in the endemic and epidemic zones compared to the vulnerable zone that has yet to be affected by the disease.”

“We see these signatures, they’re consistent among several species and we need to learn more about what that means,” Muller said.

For example, Rhodobacterales have been associated with unhealthy coral reefs and their environment in other contexts. “This might be a case where it’s an opportunistic pathogen,” said Rosales. In other words, these bacteria might be taking advantage of corals that were already sickened by another pathogen. “Even so, what we’re seeing here may be still very important. In many human diseases the opportunist is the one that causes the fatality.”

This type of field-based study can’t confirm if Rhodobacterales and Rhizobiales species cause the disease, attack corals that already have disease, or simply coincide with the disease and serve as indicators. In addition, finding bacterial DNA doesn’t confirm that the bacteria were alive when sampled—but it does point scientists in useful directions.

Muller notes: “The results of this study could allow us to start targeting Rhodobacters, the strains we saw from the order Rhodobacterales, for follow-up experiments. Can you apply something that is specific to killing them and see how that affects the disease? I hope the microbiology community will further this line of inquiry.”

“To me, a logical next step would be looking at more of their genome,” Rosales said. “We looked at a very short DNA segment to say ‘who are you,’ and next we could look at longer segments to ask ‘what can you do?’ For example, are they likely to be resistant to certain antibiotics?”

NOAA is expanding the application of this area of research, known as ‘omics—a suite of advanced methods used to analyze material such as DNA, RNA, or proteins, to understand at a genetic level how organisms respond to their ecosystem to better inform management and restoration approaches.

Mote and FWC scientists and partners are working to clear up one key uncertainty: Are we sure the bacteria in sediment and water are related to the stony coral tissue loss disease and not simply varying by geographic location? To check, researchers are re-sampling corals, water and sediment in sites that were disease-free in the current study and later became sick.

Rosales explains why sediment is in the spotlight: “The hypothesis has been for a while that this disease came about from dredging the port of Miami—that could mean sediment was transported and it transmitted a pathogen. And in our paper, we found these genetic signatures in the disease lesion that are in the sediment—so we can’t rule out the role of sediment.”

NOAA, UM, Mote and FWC scientists are advancing multiple lines of research on stony coral tissue loss disease in partnership with dozens of other institutions involved in a Disease Advisory Committee overseen by the Florida Department of Environmental Protection. One team of scientists is dedicated to identifying the pathogen(s), and researchers are exchanging data and ideas regularly in an unprecedented effort to tackle this unprecedented challenge.

“Identifying major players within the etiology of stony coral tissue loss disease would be a great advantage for effectively upscaling restoration as this disease becomes an endemic part of the ecology of Florida's Coral Reef,” Muller said. “Knowing the pathogenic agents allows for more effective treatment, targeted resistance screening, and a greater ability to increase the survival of outplanted corals.”