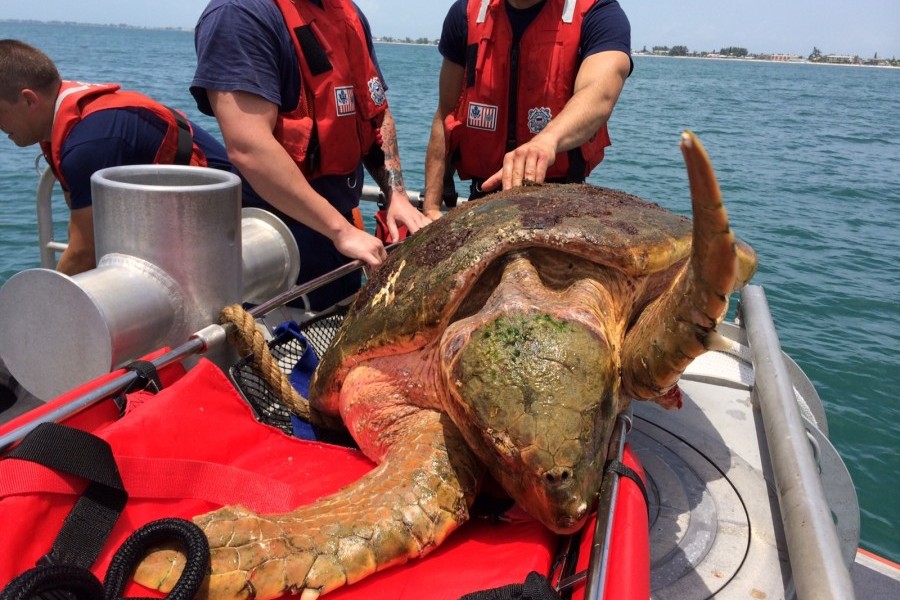 A sea turtle rescued by the Coast Guard Sunday, June 15, one mile off Longboat Pass is being treated for boat-strike injuries today, June 17, at Mote Marine Laboratory. This turtle’s story serves as a reminder to watch out for marine animals while boating and to report animals in distress.

A member of the public reported the turtle to Coast Guard watchstanders at Sector St. Petersburg, who quickly mobilized a marine vessel for the rescue and notified Mote’s Stranding Investigations Program — a 24 hour response service for marine mammals and sea turtles in Sarasota and Manatee counties — that they would bring the turtle ashore. The 230-pound female loggerhead turtle had an unidentified sharp object sticking out of her shell and was unable to dive. Coast Guard officials lifted the turtle aboard their boat, cradled her atop a large rubber tire and delivered her to the boat ramp at Ken Thompson Park, near Mote.

Mote staff received the turtle in their truck, and with Coast Guard officials assisting, transported the turtle to Mote’s Sea Turtle Rehabilitation Hospital.

"The Coast Guard did an exemplary job out in the water rescuing this turtle,” said Rebeccah Hazelkorn, Staff Biologist with Mote’s Stranding Investigations Program. “They made sure the turtle and their personnel were safe the entire time, and they contacted our response team at Mote quickly. Their help was immensely important for this challenging rescue, with such a large animal so far offshore.”

"The Coast Guard and the crew of Station Cortez is devoted to our mission of Living Marine Resource protection,” said Chief Petty Officer Daniel Benoit, the officer in charge at the Coast Guard Station Cortez. “Even though it is not one of our missions that gains the most praise, it is one of our most important, and it is one that we place an incredible sense of pride and professionalism into. Being able to preserve our marine wildlife for our children and offer protection to those species that need it is one of the many highlights of our job. This is one of the main reasons we chose this profession.

Mrs. Turt Lee is in stable condition, but she has fresh boat-strike wounds across her carapace (upper shell), lacerations to both front flippers, damage to her tail and right rear flipper and the mark of an old shark bite. The sharp object initially seen in her shell fell out before she was recovered. Mote staff are providing Mrs. Turt Lee antibiotics, fluid therapy and other care.

Mote’s Sea Turtle Rehabilitation Hospital has treated more than 450 sea turtle patients since 1995. All sea turtles are endangered or threatened species protected by state and federal laws, so helping each animal recover is vital.

Be sure to stow trash and line when under way. Marine debris that accidentally blows overboard or out of a truck can become ingested by or entangled around marine life.

While viewing any large marine animals, follow 10 viewing tips (designed for dolphins, but suitable for other large marine species too). Click here for a PDF.

Emergency Contacts
If you see a sick, injured or stranded sea turtle, dolphin or whale in Sarasota or Manatee county waters, contact Mote Marine Laboratory’s Stranding Investigations Program at 888-345-2335. For manatees, and for any marine animals outside of Sarasota or Manatee counties, please call the Florida Fish and Wildlife Conservation Commission (FWC) at 888-404-FWCC (3922). 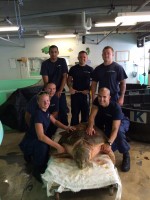