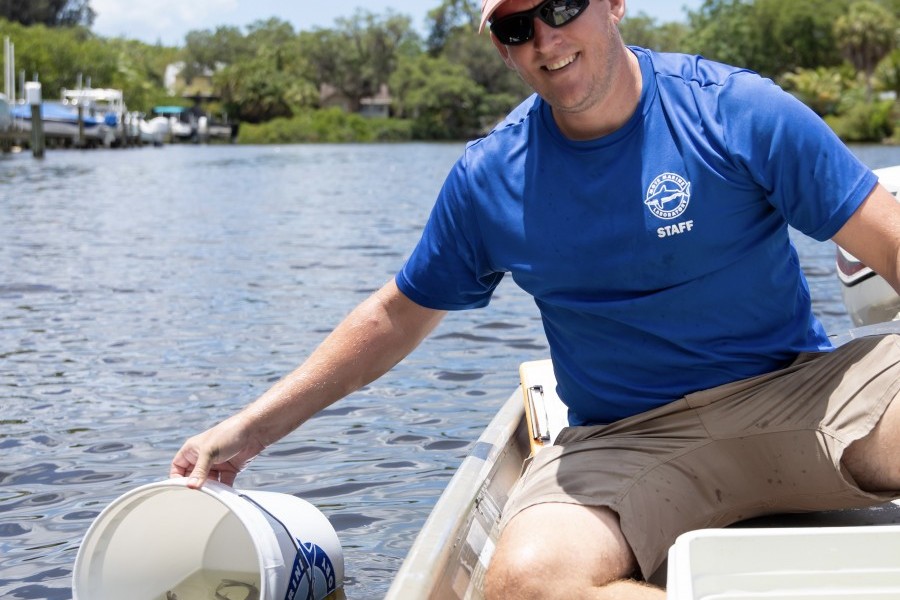 Over the course of a few releases in early June, Mote Marine Laboratory scientists released 1,440 hatchery-reared juvenile snook into Phillippi Creek, a local estuary system important for this species. This is part of an ongoing research project which focuses on finding the most effective methods to replenish and enhance wild snook populations, for which over 8,000 fish have been released so far this year. These releases were focused primarily on researching how different levels of salinity the fish were raised in can impact their lives in the wild, depending on the levels of salinity at the location of release.

These snook were raised at Mote Aquaculture Research Park (MAP) and were fitted with PIT (passive integrated transponder) tags. By placing an antenna along the shore, each PIT tag is detected when a fish swims by, allowing Mote scientists to monitor each fish’s movement and survival, and hopefully draw conclusions about the impact of the salinity fish are raised in prior to release.

Common snook, Centropomus undecimalis, is one of the most highly sought-after sportfish. They are known for their impressive size and exhilarating fight, making them very popular for recreational fishers. Sale and commercial harvest of snook is prohibited and therefore people can only enjoy the delicious fish if they catch one themselves. In Florida, recreational fishing draws in billions of dollars annually.

To address concerns about their populations, and ensure the long term success of this recreational fishery, Mote has partnered with Florida Fish and Wildlife Conservation Commission (FWC) to study the effectiveness of stocking hatchery-reared snook on their population. Due to these efforts, restrictions on snook fishing, and careful monitoring, snook populations have rebounded since the 1990s.