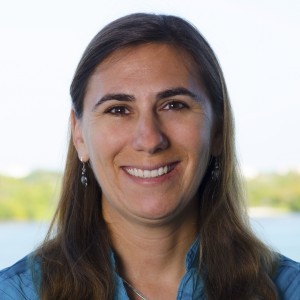 Kristen joined the Sea Turtle Conservation and Research Program in 2008 as staff biologist monitoring nesting loggerheads (Caretta caretta) and green turtles (Chelonia mydas) on 35 miles of sea turtle nesting beach. She was promoted to Senior Biologist in 2009. Since then, she has managed >250 turtle patrol volunteers (2009-2011) and currently leads the coordination of the morning patrol program. Since 1998, she has studied sea turtles in North Carolina, South Carolina and now Florida and her varied experience includes genetics, stranding response, rehabilitation, necropsy, satellite tagging, and live trawl and seine captures. She holds Florida Marine Turtle Permits for Longboat, Siesta and Casey Keys and the STCRP research permit. At Mote, her interests lie in studying anthropogenic disturbances to nesting turtles on the beach. To date, she has investigated the curing properties of epoxy for satellite attachment, trends in disorientations in order to develop better light-management strategies, and post-release behavior of a rehabilitated adult male loggerhead.

As part of our continued commitment to the safety of our guests, Mote Aquarium Staff and Volunteers, and out of an abundance of caution, Mote Aquarium is temporarily closed to the public, effective March 16, until further notice. Regular updates of Mote Aquarium operations status will be available at either 941-388-4441 or online: mote.org/COVID19