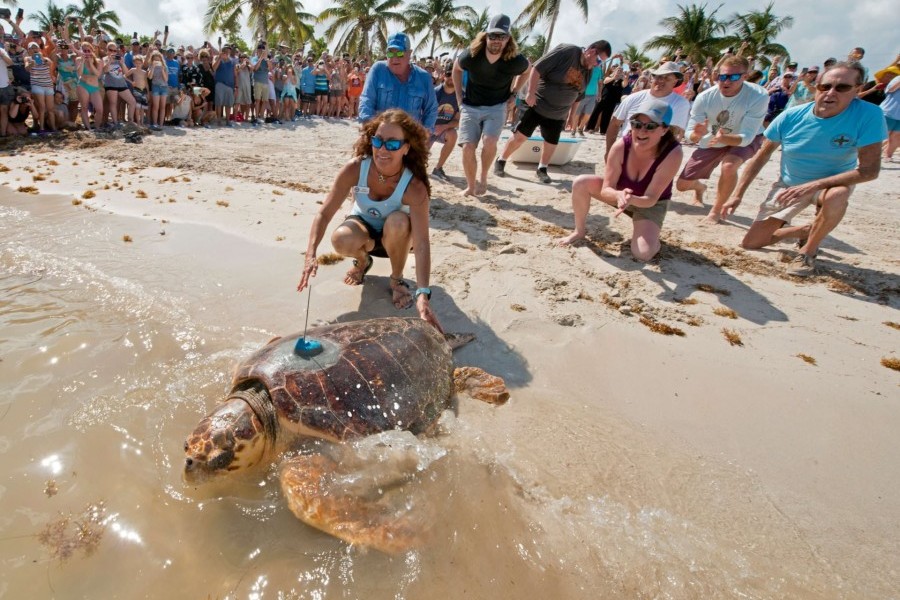 Mr. T was released on May 7, 2019 on Marathon in the Florida Keys. Photo: Andy Newman/Florida Keys News Bureau

It's not goodbye, it's see you later

Although we don't want to see Mr. T, a recently rehabilitated turtle, in person again, scientists (and members of the public) can "see" him again thanks to an attached satellite transmitter. Follow Mr. T's journey here.

May 7, 2019 - Marathon, Florida - Hundreds of members of the public and media gathered at Sombrero Beach in Marathon, FL to watch "Mr. T", an adult male loggerhead sea turtle, be returned to his home. After successful rehabiliation at The Turtle Hospital, a rehabilitation facility located in Marathon, Mr. T was able to be released this May back into the ocean, but first he received a satelitte transmitter, applied by Mote Marine Laboratory's Senior Biologist Kristen Mazzarella, to allow scientists to track his path following his release.

Mr. T was rescued offshore of Tavernier in early February 2019, found with a fishing hook lodged in his mouth. He was transported via a "turtle ambulance" to The Turtle Hospital, a rehabilitation facility located in Marathon, where an endoscopy procedure also revealed a large tear in one of Mr. T's lung. The Turtle Hospital performed surgery to remove the hook from Mr. T's mouth and applied a blood patch to help repair the tear in his lung. Other treatments included broad spectrum antiobiotics, IV nutrition, apin mediciation, vitaminds, and a healthy diet of fish and squid. Mr. T fully recovered, and was able to be released on May 7.

Prior to release, Mote's Kristen Mazzarella, a Senior Biologist in the Sea Turtle Conservation & Research Program, traveled from Sarasota to Marathon to apply a satellite tag to Mr. T. As an adult, male loggerhead, Mr. T presents a unique opportunity to study his species, specifically males. Male sea turtles do not return to shore once they hatch, so opportunities are rare to see a male and deploy a tag. In partnership with The Turtle Hospital and Sea Turtle Conservancy, Mazzarella applied the tag to Mr. T's carapace on Sunday, May 5 in preparation for his release that Tuesday. Follow Mr. T's track, and the tracks of other tagged sea turtles, at mote.org/sea-turtle-tracking. 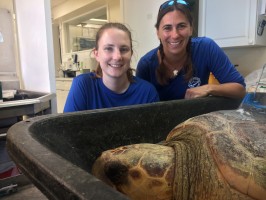 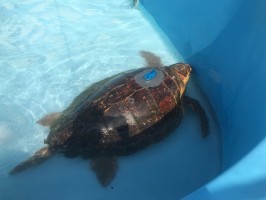