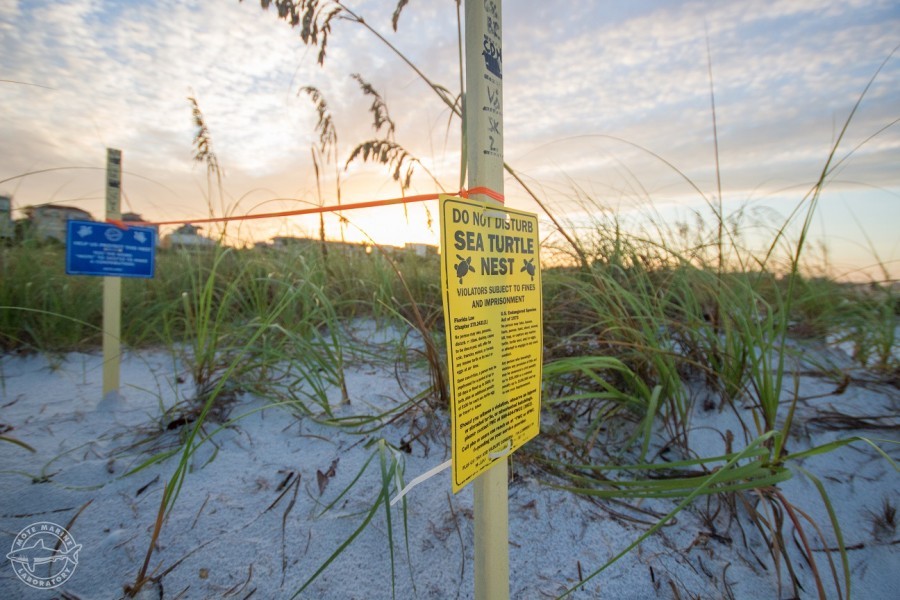 August 6, 2019 -- Sarasota, FL -- Sea turtle nesting season is not yet over, but Mote’s Sea Turtle Conservation and Research Program (STCRP) has already recorded a 38-year-record number of nests in the Sarasota area. STCRP monitors sea turtle nesting on the 35-mile stretch of beaches from Longboat Key through Venice.

As of August 4, Mote’s STCRP has documented a total of 5,063 nests across all sea turtle species – 4,888 loggerhead nests, 170 green turtle nests and five other nests. As female sea turtles nest every two to three years, many of them are expected to be returners from 2016, the previous total nest record, which had a total count of 4,588 nests. For the first time in the program’s history, there are at least two green sea turtle nests on every key/region in Mote’s area of monitoring. More records are included below.

In addition to record nesting numbers, STCRP has also been busy tagging a record number of nesting females. The team applies flipper tags and passive integrated transponder (PIT) tags (similar to a pet microchip) to nesting females, allowing researchers to estimate the number of individual females nesting on local beaches. As of July 31, STCRP tagged 468 turtles, compared to 2016's record of 451 turtles tagged. The team also logged a record number of turtle encounters, 719. For each encounter, the team records the individual, date, location and what the female is doing during the encounter.

The increase in green sea turtle nesting this year has also presented researchers the opportunity to learn more about this threatened species through satellite tagging. STCRP applied satellite transmitters to seven green sea turtle females this past year, more than ever before, which the public can follow at mote.org/seaturtletracking. Now through August 9, members of the public can participate in a naming contest for one of the satellite-tagged turtles.

Mote’s long-term tagging and nesting data are crucial for determining estimates and trends for sea turtle populations in our area, and can answer important questions such as how well local nesting females survive year to year, how often females return to a specific site, how far apart a female spreads her nests, and how many turtles enter the nesting population each year. These kinds of questions contribute to our understanding of the biology and ecology of female turtles, specifically, how aging and environmental conditions affect individual reproductive success, and help inform state and federal policy makers with the best possible data.

Mote scientists and trained volunteers, who work under a state-issued Marine Turtle Permit, diligently mark and monitor nests while patrolling the 35-mile stretch of beaches each day of nesting season, starting April 15th. During peak nesting months, the program also tags turtles with flipper and PIT tags to collect data on individual nesting turtles on Casey Key, the densest nesting beach in the Mote-patrolled area. The data collected from both of these projects help scientists have a more detailed understanding on the management and conservation of sea turtles in Florida and the region.

STCRP has also tagged sea turtles with satellite transmitters since 2005, allowing scientists to learn more about the nesting and traveling behavior of individual sea turtles. The data collected include information on where they travel to forage (feed) after nesting season ends.

Learn more about the conservation and research efforts of STCRP at mote.org/seaturtles

On the nesting beaches, artificial light from waterfront properties or people with flashlights or cell phone lights can disorient nesting female turtles and their young, which emerge at night and use dim natural light to find the sea. Along with lights, beach furniture, holes, trash and other obstacles can impede sea turtles and hatchlings. Mote encourages coastal residents and visitors to follow the turtle-friendly tips listed below during official nesting season, May 1-Oct. 31.