Stories on this page: Deeply interesting findings from blue holes • Tag-team effort pays off • Mote tracks the outcome of a prominent restoration site 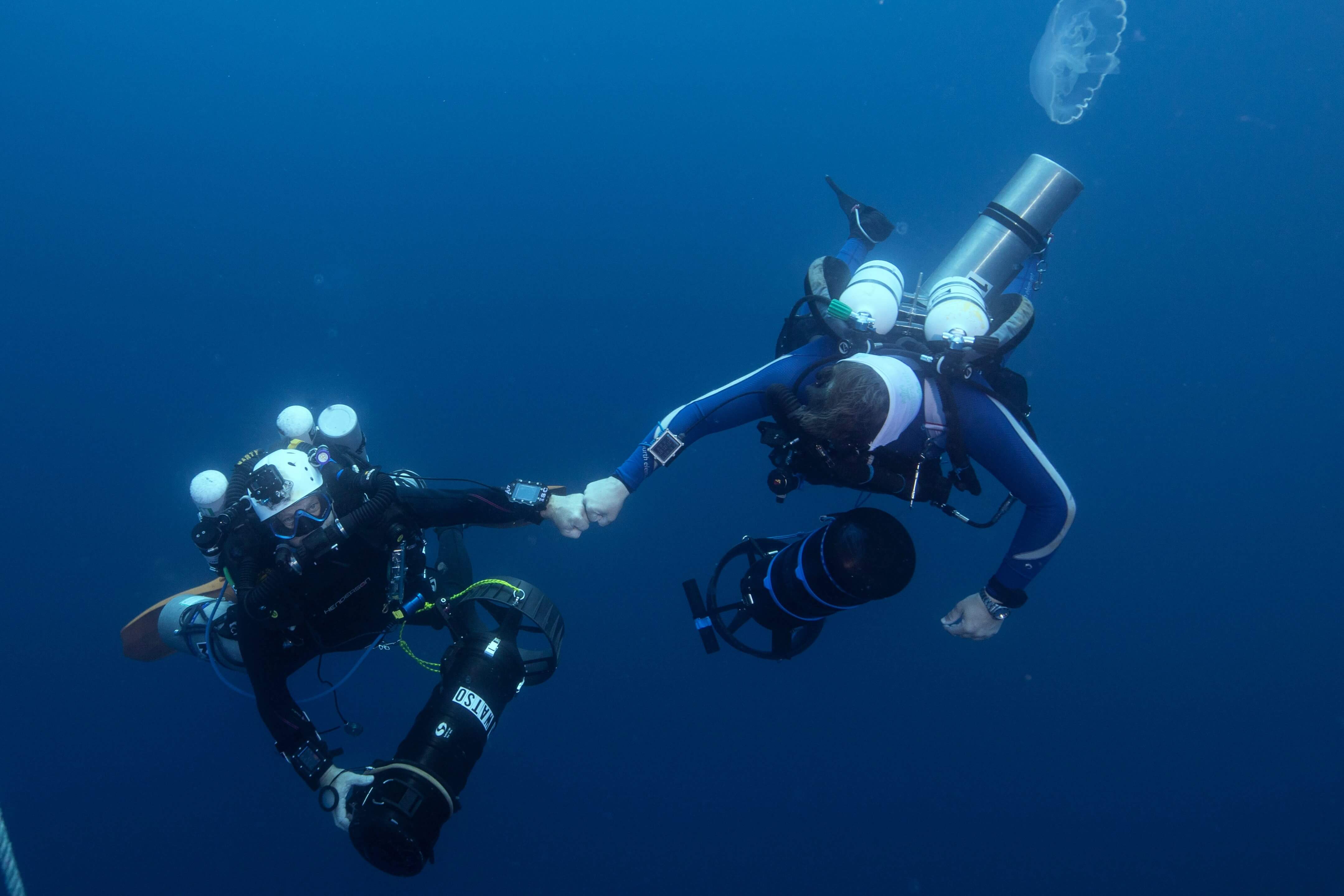 Divers share a fist bump during a Mote-led expedition to explore a blue hole in the Gulf of Mexico. Credit: Kristin Paterakis

This year, Mote scientists undertook some of their deepest and most challenging missions yet into the Gulf of Mexico’s blue holes—underwater caves, springs and sinkholes being explored for their unique biology, chemistry and structure.

The world took notice of these pioneering efforts during July and August 2020, when Mote’s blue hole research appeared in 242 news stories estimated to reach more than 850 million viewers or readers. Notably, one of Mote's upcoming blue hole expeditions was covered by The New York Times and VICE News and was mentioned on The Late Show with Stephen Colbert. One blue-hole expedition was the subject of an entire episode of the national program Changing Seas produced by South Florida PBS.

Mote scientists originally pioneered the scientific exploration of Gulf blue holes in partnership with skilled technical divers, and the current research project took their exploration to new levels. By early 2020, Mote and partners had undertaken multiple dives 350 feet deep into a blue hole called “Amberjack Hole,” continuing efforts they began in 2019. In September 2020, the team refocused on an even-deeper expedition to the site “Green Banana,” where dives reached deeper than 400 feet.

In this ongoing study, Mote scientists are working with Florida Atlantic University’s (FAU’s) Harbor Branch Oceanographic Institute, Georgia Institute of Technology, and the U.S. Geological Survey to deploy cool technology—a heavy framework called a benthic lander carrying sensing and sampling gear—into these offshore holes and gather new data on their chemistry, life forms, and other features. Team members want to know how these offshore blue holes might influence the Gulf of Mexico and whether they might even have underground connections to the Floridan Aquifer.

This year, scientists from Mote, the Sarasota Dolphin Research Program (SDRP)*, New College of Florida, FAU and Loggerhead Instruments expanded their research on multiple marine animals through the Sarasota Coast Acoustic Network (SCAN) and began to announce some exciting, SCAN-driven discoveries. SCAN was supported by Mote Scientific Foundation from 2016-2020 and is seeking support to build upon the exciting progress reported below.

Some SCAN members tag marine animals with acoustic transmitters that regularly emit an ultrasonic “ping” too high-pitched for human hearing. Each animal’s unique signal can be detected by one of 67 Innovasea-Vemco acoustic receivers (expanded from 48 in fall 2018) that the team has installed in Sarasota Bay, its inlets, passes, creeks and coastal to offshore waters between Anna Maria Island and Venice, Florida. SCAN partners also use underwater passive acoustic “listening stations” to record sounds of dolphins, fishes and human activity.

From 2016 through late 2020, SCAN partners have acoustic-tagged:

Thanks to SCAN and surrounding acoustic networks, Mote and FAU scientists have been able to conduct the first major study of where spotted eagle rays migrate along Florida’s coasts. This study—in press with a peer-reviewed journal when the current fiscal year concluded—will be shared in detail in Mote’s 2021 annual report.

This year, SCAN partners also shared fascinating findings about how far spotted eagle rays will travel to avoid red tide. In 2016 and 2017, red tide reached the Sarasota Bay area by September and SCAN-tagged eagle rays left the area earlier than they typically would for their winter migration south. In both years, many of those rays moved south to Charlotte Harbor or possibly to offshore locations. In 2018, when red tide became widespread and devastating for both Sarasota Bay and Charlotte Harbor, the rays fled even farther. Many traveled from Sarasota to the Florida Keys—a straight distance of about 200 miles. As red tide vanished in 2019 and remained absent for most of 2020, many tagged rays returned to Sarasota Bay and Charlotte Harbor. Mote and FAU scientists are still receiving and processing data on the rays’ movement during 2020 months without red tide, working to provide a full picture of how spotted eagle rays behave before, during and after a bloom.

Spotted eagle rays—prohibited from harvest in the U.S. but fished in other parts of their range—are listed as Near-Threatened by the IUCN, but their true status is uncertain due to major data gaps. Research by Mote, FAU, and acoustic networks including SCAN are working to change that.

*SDRP is a Chicago Zoological Society Program in collaboration with Mote.

MOTE TRACKS THE OUTCOME OF A PROMINENT RESTORATION SITE

Community leaders overseeing The Bay, Sarasota’s 53-acre bayfront park, have tapped scientists at Mote—an independent, nonprofit institution—to monitor the effectiveness of improvements made to its mangrove bayou and half-mile of shoreline.

Beginning in summer 2020, Mote has been conducting detailed surveys of impacts on water quality, sediment and fisheries in the wetland area, and they’re providing The Bay with detailed quarterly reports on any changes to the local environment.

Mote scientists emphasize the need for monitoring before, during and after improvements for a complete picture of their effects on Sarasota Bay and the immediate environment. The Bay has been implementing water-quality treatment tools along its Mangrove Walk, including bioswales, a nutrient barrier (a 5-by-5-foot trench buried underground at the groundwater level, filled with carbon and mulch), stormwater marshes and the no-mow zone along the bayou’s edge.

Mote scientists are: surveying oysters, other bottom-dwelling organisms and sediments; sampling fish communities at The Bay restoration area compared with urbanized shorelines and natural mangrove habitats; and collecting data on water temperature, salinity, nutrients, and other measurements that Mote has collected in Sarasota Bay for decades in a partnership with Sarasota County.