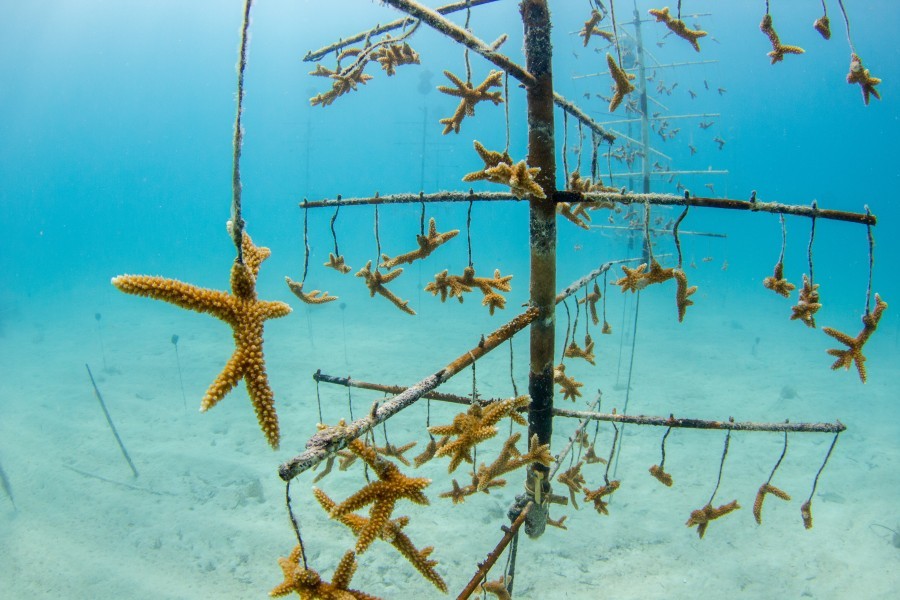 The study on the species Acropora cervicornis, known as the staghorn coral, emphasizes the need for maintaining genetic diversity while at the same time increasing resilience within the species, as part of restoration efforts to help prevent further loss in the Florida region.

Once prevalent throughout the Florida Reef Tract, the staghorn coral has suffered substantial declines over the last several decades due to increasing ocean temperatures and disease outbreaks, with no evidence of natural recovery. The Florida Reef Tract is currently estimated to be worth over $6 billion to the state economy, providing over 70,000 jobs, and attracting millions of tourists into Florida each year – but much of its ecosystem services will be lost if the living coral is not restored.

“With imminent threats to the staghorn coral, it is now the focus of restoration efforts throughout much of the Florida region, thanks to the existence of some coral genotypes that are more resilient to threats than others,” says lead author Dr. Erinn Muller, Program Manager and Science Director of the Elizabeth Moore International Center for Coral Reef Research and Restoration at Mote Marine Laboratory, Florida. “However, there could be tradeoffs associated with these resilient traits, such as heat-tolerant corals being highly susceptible to disease infection.”

“Previous studies showed there are certain staghorn genotypes resistant to white band disease,” said Muller. “However, it is still unclear how high-water temperatures caused by climate change influence disease resistance and what role, if any, the algae that live and interact with the corals – their ‘algal symbionts’ – play in stress resistance. We therefore wanted to see what percentage of staghorn corals within the lower Florida Keys are disease resistant, and how this resistance changes during a warm-water event that leads to coral bleaching.”

To do this, Muller and her team exposed the same staghorn coral genotypes to white-band diseased tissue before and during a coral bleaching event. They found that, in the absence of bleaching, around 25% of the population tested was resistant to the disease. However, when the corals were exposed to it during the bleaching event, their mortality rate doubled.

Interestingly, the team, which included researchers from the Mote Marine Lab and Penn State also found that two coral genotypes were resistant to the disease even while bleached. The level of bleaching within these genotypes was not related to disease susceptibility or their algal symbiont strain, suggesting there are no direct tradeoffs between their levels of heat tolerance and disease resistance.

“While we are working on reducing carbon dioxide emissions that cause climate change and ocean warming as fast as possible, our best chance at enhancing adaptation of corals and their symbionts to their warming environments is to promote genetic diversity of coral and symbiont populations,” said Iliana Baums, associate professor of biology at Penn State, an expert in coral molecular ecology

Baums developed the genetic methods used in this research to fingerprint the genetic strains of symbionts associated with each of the coral colonies. Such high-level resolution has not yet been applied commonly in coral experiments. It allowed the team to disentangle the response of the coral host versus the symbiont genotype to the multiple stressors they experimented with.

“Together, our findings show that the staghorn coral’s susceptibility to temperature stress creates an increased risk in death from disease, and that only two of the genotypes tested may maintain or gain disease resistance under high temperatures,” said Muller. “As recurring warming events may cause continued loss of these resistant genotypes, it is crucial that restoration efforts focus on maintaining high genetic diversity to help keep these corals alive in a warming climate.”

The paper ‘Bleaching causes loss of disease resistance within the threatened coral species, Acropora cervicornis’ can be freely accessed online here. Contents, including text, figures and data, are free to reuse under a CC BY 4.0 license.