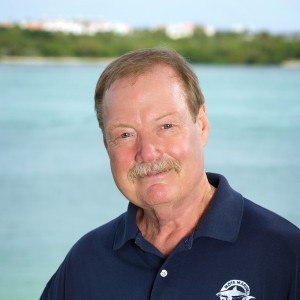 Dr. John Reynolds was a Mote Senior Scientist who passed away on Dec. 23, 2017. He helped Mote become a beacon of conservation-focused science, particularly through his leadership of its Manatee Research Program — a cornerstone of scientific understanding and protection of these unique mammals in Florida and the Caribbean. The Manatee Research Program continues at Mote, and Reynolds' legacy continues to benefit marine science, conservation and education around the globe.

Reynolds received his M.S. and Ph. D. degrees in Biological Oceanography from University of Miami's Rosenstiel School of Marine and Atmospheric Sciences in 1977 and 1980, respectively. He was employed at Eckerd College, St. Petersburg, Florida, from 1980-2001, where he served as Professor of Marine Science and Biology and Chairman of the Natural Sciences Collegium; he was integral in establishing the College's renowned marine science major and remains the only Eckerd faculty member to receive all three of the College's faculty excellence awards for teaching, leadership, and scholarship. In 1991, Reynolds was appointed by President George H.W. Bush to serve as Chairman of the U.S. Marine Mammal Commission, the federal agency with oversight for all research and management of marine mammals in the United States. He led that agency through mid-2010 under four different administrations, and in 2010, the agency's accomplishments were recognized by a distinguished service award by the international Society for Conservation Biology. Since 2001, Reynolds served as a Senior Scientist for Mote Marine Laboratory in Sarasota, Florida, where he served as Director of the International Consortium for Marine Conservation and Director of the Center for Marine Mammal and Sea Turtle Research. From 2001-2008, he was co-Chair of the IUCN Sirenian Specialist Group, and from 2006-2008, he served as President of the international Society for Marine Mammalogy. Recently he worked with the United Nations Environment Programme to develop and implement a Caribbean-wide Marine Mammal Action Plan. Reynolds was a member of Phi Beta Kappa; was honored and recognized repeatedly for his accomplishments in conservation and science; and published more than 300 books, papers, and abstracts.

1970: Sons of the American Revolution Award American Legion Good Citizenship Award 1972: Selected as member of Tri Beta Biological Honor Society 1974: Selected as member of Western Maryland College Honor Society: Argonauts (precursor to Phi Beta Kappa) 1977: Florida Wildlife Federation Award for Research Excellence National Wildlife Federation Fellowship 1982: Selected as an Outstanding Young Man of America, endorsed by U.S. Jaycees 1984: Selected as Member of Omicron Delta Kappa (ODK) 1986: Awarded Robert A. Staub Distinguished Teacher Award, Eckerd College 1987,  89,  95: Nominated for Professor of the Year Award, a national award conferred annually by the Council for Advancement and Support of Education 1990: Nomination to be a member of the Corps of Evaluators for the Southern Association of Colleges and Schools (SACS) 1991: Appointed by President George Bush to be Chairman of the Marine Mammal Commission. 1998: Awarded John M. Bevan Teaching Excellence and Campus Leadership Award, Eckerd College. Selected as one of four speakers by the Coastal America Partnership Program to provide presentations to celebrate the International Year of the Ocean in the U.S. 2001: Nomination of The Bottlenose Dolphin: Biology and Conservation for the Phi Beta Kappa Award in Science Awarded Lloyd W. Chapin Excellence in Scholarship Award (first to receive this award), Eckerd College 2003: Elected to Phi Beta Kappa as an alumnus of McDaniel College, Westminster, MD. 2004: Presented the Alumni Award for Professional Achievement, presented by the Board of Trustees of McDaniel College, Westminster, MD Elected President-Elect, Society for Marine Mammalogy 2007/2010: Nominated for the Tyler Prize for Environmental Achievement 2010: Distinguished Service Award given to Marine Mammal Commission by the Society for Conservation Biology 2013: Ecology and Conservation of the Sirenia nominated for book of the year by the Wildlife Society