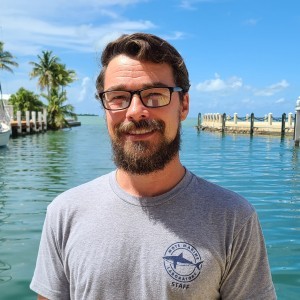 Travis Knorr, an avid SCUBA diver since the age of 12, moved to the Florida Keys in 2007 to become an aquarium fish collector. Deciding he needed to do something beneficial for the Florida Keys ecosystem, he began working as the Science Lab Technician at the College of the Florida Keys where he also co-founded the College's Aquaculture Club. There, he received his Associate of Arts degree, and Bachelor of Science degree in Marine Resource Management, as well as college certificates in Professional Research Diving, and Tropical Ornamental Mariculture.

After working part-time as the Life Support Systems Technician at the Key West Aquarium, in 2020 he became the Curator and Operations Manager of the historic facility. In 2022 he then began work at MOTE’s Elizabeth Moore International Center for Coral Reef Research & Restoration as the Life Support Systems Manager. Travis also volunteers for the Marine Aquarium Society of North America as a member of the board of directors. In his free time, he operates a home aquaculture company with his amazing wife, Mick Walsh. The duo also maintains mixed reef, FOWLR, and freshwater aquaria including an aquaponic system. When he's not elbows deep in fish tanks, Travis enjoys sailing his Hobie Cat, camping, and restoring old cars.