Webinar – Seeing Yourself in STEM: Aquanauts to Astronauts

African American leaders from sea to space and beyond

Community organizations, school classrooms, homeschool groups and the public are invited to join us for a free interactive livestream this February – Seeing Yourself in STEM: Aquanauts to Astronauts.

In honor of Black History Month, this livestream will highlight African Americans working in STEM industries. Join marine biologists and SCUBA divers from Sarasota, Florida-based Mote Marine Laboratory and aerospace educators and geomorphologists from the New York, New York-based Intrepid Sea, Air & Space Museum. This program will connect participants with African American leaders who are providing stellar contributions to the scientific community, from sea to space. Part of the PEC Spring into Digital Learning online festival.

Frantz Lucien Jr. is the Manager of Interactive Experience and Family Engagement at the Intrepid Sea, Air and Space Museum. Frantz received his B.A. in Communication from the University of Scranton and his M.A. in Rhetorical Studies from Hofstra University. At the Intrepid, Frantz spearheads the distance learning initiative; doing educational programs via telephone and Skype all around the world. He oversees educational programs for large scale events, while also focusing on family programming and public demonstrations at the museum.

Shihadah “Shay” Saleem is Manager of Teen Leadership Programs at the Intrepid Sea, Air & Space Museum.  As a co-founder of GOALS (Greater Opportunities Advancing Leadership and Science) and manager of the long-standing Youth Leadership at the Intrepid, she develops and delivers programs and workshops for diverse audiences. Shay provides rich STEM (science, technology, engineering and math) and youth development programs and opportunities for students, parents and the community. Shay graduated with a B.A. from Alfred University, majoring in Environmental Sciences with an emphasis in natural sciences and geology. She is also a graduate of University of South Florida, College of Marine Science with her Master of Science Degree in Marine Geomorphology. While a two-time recipient of NSF’s GK-12 OCEANS program, she worked as a graduate mentor for the outreach program, Oceanography Camp for Girls and a graduate teaching assistant at an elementary and middle school of Pinellas County Florida. There Shay found her loving of teaching and developing learning module for STEM, especially in marine science. She developed and facilitated various teacher professional developments for K-12 teachers and educators.  In 2008 she returned to New York City to work at the Intrepid Sea, Air & Space Museum delivering and developing STEM and history based programs and workshops for NYC school, teachers, cultural institutions and communities. Shay’s passion is in teaching and mentoring young women, introducing them to the myriad possibilities and opportunities in STEM careers.

Amanda Hodo was born and raised on the south side of Chicago. She attended Grinnell College in Grinnell, IA and graduated with a B.A. in Biology. She began her career in aquarium husbandry with internships at Mote Aquarium and the Shedd Aquarium in Chicago, IL. Amanda is an Aquarium Biologist III at, and has worked at Mote for over 4 years. She managed Mote's Seahorse Conservation Laboratory for over 2 years, breeding local species and sharing those offspring with other zoos and aquariums. Some of her favorite duties are breeding fish and scuba diving in the shark exhibit. In the fall of 2018, Amanda was one of the four winners of the Association of Zoos and Aquarium's "Find Our Heroes" award. It was a nation-wide video submission contest in which AZA received over 95 submissions. She will be featured in AZA's national campaign airing in February.

Ross Johnston is from Santa Cruz, California, where he became exposed to marine laboratories from visiting and volunteering at Moss Landing Marine Labs starting from a very young age. Ross’ experience has been in the environmental or conservation education departments throughout his AZA work history, including conservation curriculum development, animal enrichment and feeding narratives, and public programming with the Monterey Bay Aquarium’s “Seafood Watch” and Aquarium of the Pacific’s “Seafood for the Future.” As a National Association for Interpretation Certified Interpretative Guide, his professional background has focused on public conservation messaging and scientific program engagement. At Mote, Ross educates the public primarily through Mote SEAtrek distance learning lessons. 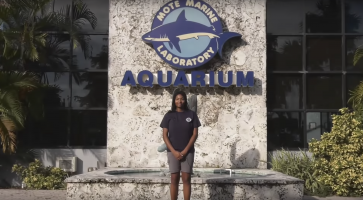 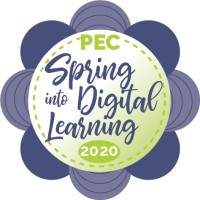 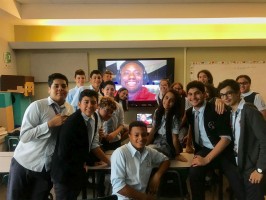 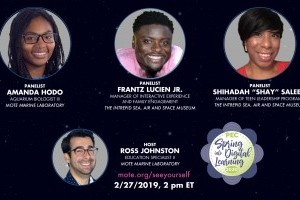