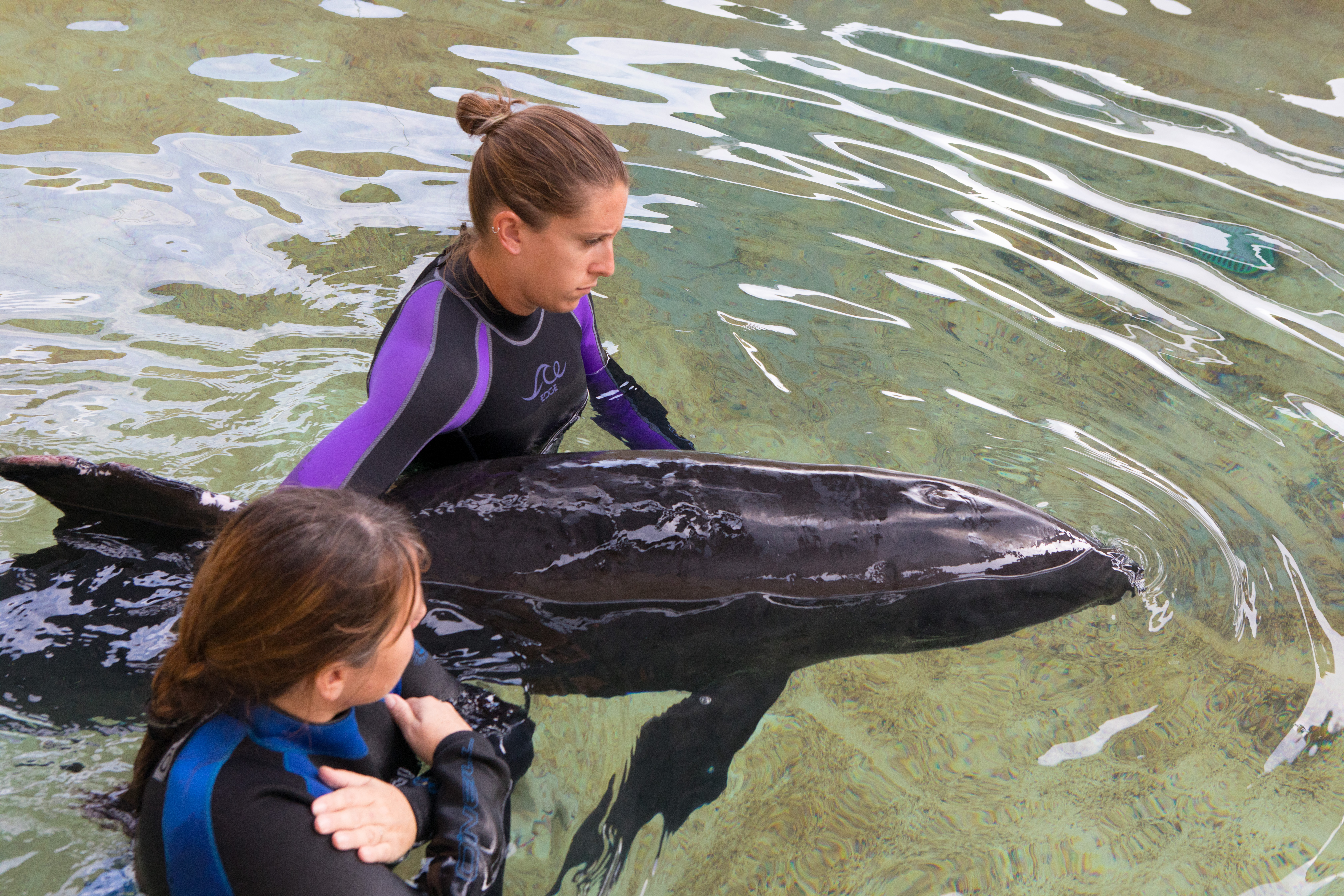 Bolt is the third recently stranded whale to arrive at Mote during the week of August 29 through September 4, 2018. Read about the rescue and arrival of all three whales here.

9/7/2018: We are sad to update that the difficult decision was made to humanely euthanize Bolt after a rapid decline over night. Listen to Gretchen Lovewell, Program Manager for Stranding Investigations, give an update here:

9/6/2018: Bolt, the male melon-headed whale rescued by Mote on Longboat Key, remains in critical condition in Mote’s hospital. Hospital staff were able to weigh Bolt, who is about 300 pounds. After spending more time with Bolt, staff estimate that he is likely an older male, due to apparent tooth wear and scarring along his back. Bolt is able to swim freely in his hospital tank under the watchful eye of caregivers. Possibly because he's a different species, Bolt seems more “feisty” than pygmy killer whales Thunder and Lightning were. However, Bolt's bloodwork reveals that he is very sick and staff remain guarded on his prognosis.

9/5/2018: Bolt is able to swim on his own, and continues to be monitored 24-7. Given his ability to swim, Mote staff have been able to raise the water level in the pool. Blood test results from Bolt are pending. Bolt is showing interest in food, and staff are planning to offer him fish soon. Mote staff have collected blood serum samples from Bolt, and the samples are sent to the Florida Fish and Wildlife Conservation Commission’s Fish and Wildlife Research Institute to test for Florida red tide toxin exposure.

After another examination, Bolt has been confirmed as a melon-headed whale (not a pygmy killer whale as originally thought). Melon-headed and pygmy killer whales are both shy, offshore species, with not as much information available as other commonly spotted cetaceans. It took time for caregivers to be able to count their teeth - a way to help distinguish the two species.

9/4/2018: Mote Marine Laboratory’s Stranding Investigations Program received a call regarding a beached whale on Longboat Key. Staff immediately responded to the distressed animal and were able to transport the whale to Mote's Jane’s Refuge Dolphin & Whale Hospital on City Island, Sarasota, to begin treatment. The third whale has been nicknamed "Bolt," and at this time remains in critical condition. Bolt is presumed male. Sex determination in this offshore, shy species is more difficult than for other species we encounter often. Bolt, the newest whale in Mote's hospital, is being examined in more detail to determine whether he is truly a pygmy killer whale (as initially supposed) or the very similar-looking melon-headed whale - these offshore species are little-understood and challenging to tell apart. An update is expected when we know more.

Critical care for just one whale costs thousands of dollars per day — and Mote cared for three. At the same time, the Lab as a whole is responding to multiple ecological emergencies: the long-lasting red tide bloom along southwest Florida requiring intensive monitoring, research and outreach; the related spike in wildlife mortality that demands attention at virtually all hours; and a record outbreak of coral disease in the Florida Keys requiring unprecedented, scientific response.

While emergency government aid is helping with parts of our response efforts, it cannot close the gap facing Mote as a nonprofit. Community support can make all the difference in helping Mote address these emergencies issues. Visit this page to support these critical efforts.