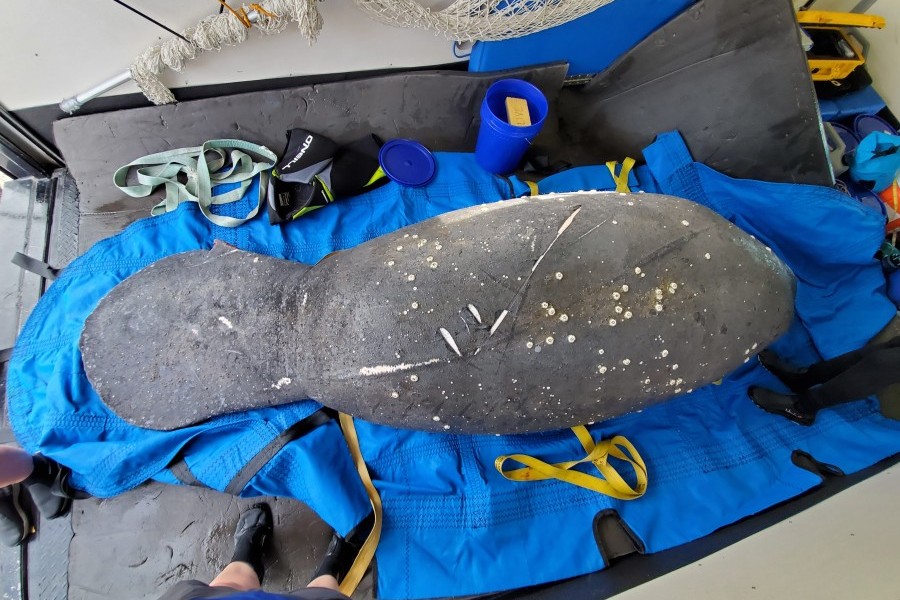 Pregnant manatee rescued by FWC and Mote in May 2020. She was suffering from both fresh and old boat strike wounds. Photo: Mote

This story was originally posted in the August 25, 2020 edition of the Sarasota-Herald Tribune.

To the residents of Sarasota and Manatee counties, we need you. And more importantly, our marine life needs you.

Earlier this year, viral stories about “nature healing” spread across the internet. The thought behind it: fewer humans out and about due to the COVID-19 pandemic and subsequent shutdowns could allow animals to flourish.

For the dedicated Mote Marine Laboratory & Aquarium researchers and biologists on the water and local beaches every day, this is not the case. 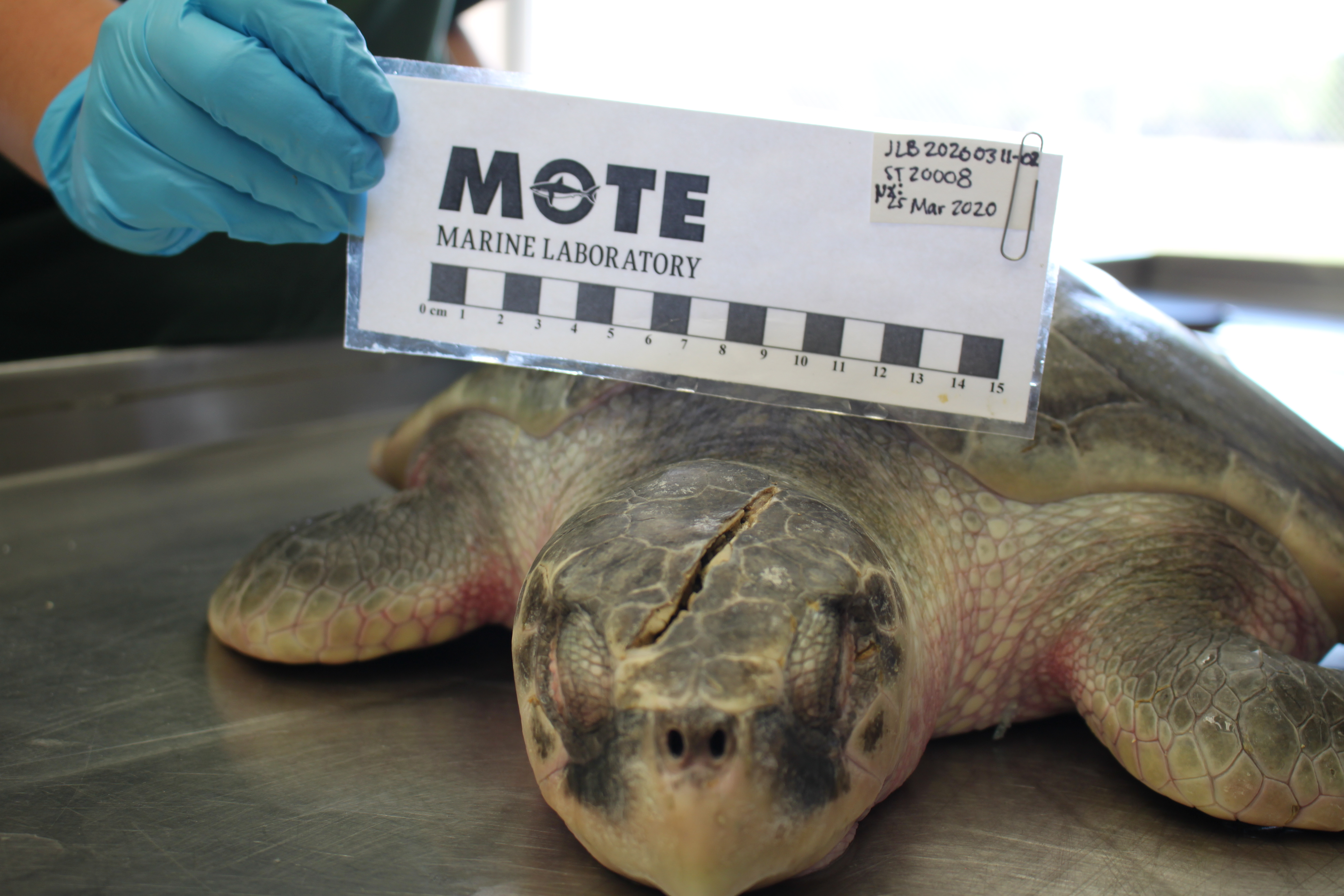 The Stranding Investigations Program at Mote, an all-women team that responds to our area’s 24/7 calls about injured or deceased sea turtles, dolphins, manatees and whales, has seen an uptick in human-related mortalities. The team has had 23 sea turtle mortalities due to boat strikes so far in 2020, which surpasses the total of 18 from 2019, with four months left in the year.

Over at Mote’s Sea Turtle Rehabilitation Hospital, it’s been a revolving door of new patients that are rehabilitated as fast as possible for release. We’re treating them for boat strikes, plastic bag ingestions, crab trap entanglements, fishing hook injuries and more, while treating a steady stream of disoriented hatchlings found in mangroves, pools, and parking lots.

And for the Sea Turtle Conservation & Research Program, which monitors 35 miles of local beaches for nesting activity, the few weeks of local beach closures hardly seem to have affected our six-and-a-half-month-long nesting season. Now, nests are hatching, and virtually every day it seems some of the hatchlings disorient—go the wrong direction upon emerging from the nest, towards artificial lighting and a path more treacherous than the sea itself.

So, to the people of Sarasota and Manatee counties, who share this beautiful water with our local wildlife, we are calling on YOU to help us.

For the Atlantic spotted dolphin that stranded himself on Siesta Key, was pushed back three times by well-intentioned but misguided beachgoers, only to wash up deceased the next day… do NOT attempt to push back or rescue animals on your own, and instead, immediately call trained responders.

For the pregnant manatee that Mote and the Florida Fish and Wildlife Conservation Commission rescued to be rehabilitated at SeaWorld Orlando, and for the highest number of manatees killed by watercraft in a single year last year… slow down, abide by no-wake zones, and use a spotter on your boat.

For the tiny sea turtle hatchlings that emerge from their nests on each beach and go the wrong way to be run over by cars… turn off your lights at night, and knock on your neighbor’s door to do the same. 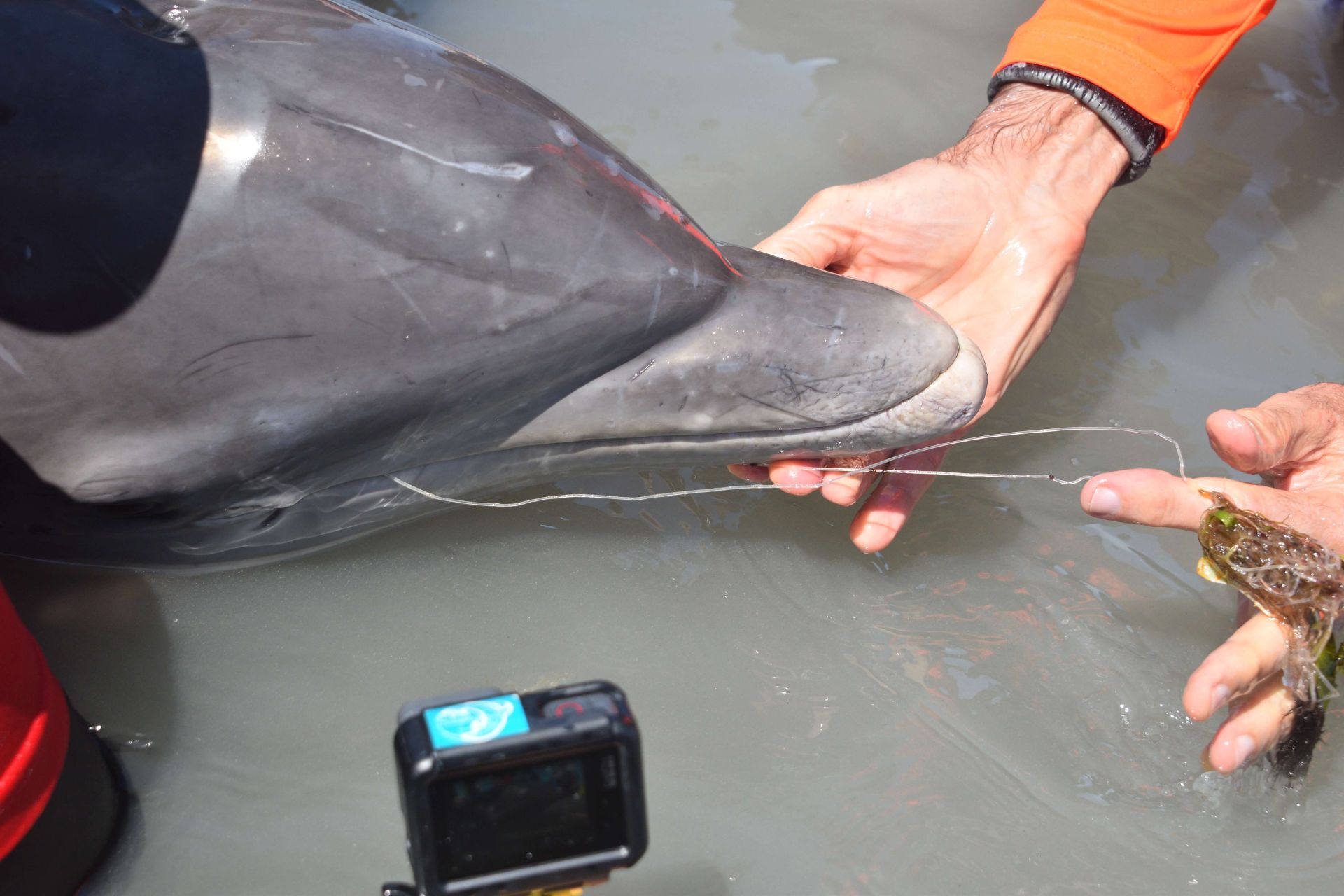 For the multiple young dolphin calves that needed to be disentangled from fishing gear last year, and the dolphins and sea turtles that didn’t survive their entanglement this year… properly stow your line and NEVER feed a wild animal.

For the mother sea turtle that laid her nest, became stuck under a beach chair and dragged it back into the surf, never to be seen again… bring in your beach furniture.

For the 72% of hatchlings one year that had plastic in their intestinal tracts, and the massive, 37-foot endangered Gulf of Mexico Bryde’s whale that died from a single, 3-inch piece of sharp plastic… reduce your single-use plastic consumption and properly dispose of your litter.

For the passionate teenager who places toy boxes around local beaches… pick up your beach toys and other items every day to remove obstacles for hatchlings.

For the 300 volunteers that patrol our beaches to document sea turtle nests, which have exploded in number during the last five years due to monitoring and education programs… stay off the beach at night and leave it as natural as possible so our turtle populations can continue to grow.

And for all of us at Mote that have dedicated our lives to the conservation of our oceans, and for all of you that deeply care about the wellbeing of our local marine life, let’s rededicate ourselves to common-sense, due-diligence practices that can mean life or death for the gentle manatees, beautiful sea turtles, and charismatic dolphins that also call Sarasota home.