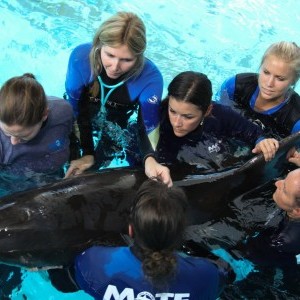 Note: As a nonprofit, Mote can only rehabilitate animals with the support of our communities. To support Mote's animal hospitals, visit www.mote.org/support, click "Donations" and select "Mote’s animal hospitals" under "Designation."
---

The dolphin was first spotted by anglers who noticed the dolphin was stranded on its side during low tide. At about 10 a.m. Thursday, Sept. 17, they called the FWC Wildlife Alert Hotline and as per protocol FWC staff proceeded to call the National Oceanic and Atmospheric Administration (NOAA), which oversees marine mammals under the Marine Mammal Protection Act.

The on-scene responders included staff and volunteers from FWC and a Clearwater Marine Aquarium (CMA) veterinarian volunteer. An initial assessment of the dolphin was completed on the sandbar where the dolphin was stranded. That team transported the dolphin to the boat ramp where they met staff from CMA to perform a deep water assessment to determine if the dolphin would be strong enough to immediately release on site. The dolphin showed some signs of attempting to swim and vocalize but was still lethargic. Through discussion among the responders and NOAA, the decision was made to transport the dolphin to a rehabilitation facility.

Mote Marine Laboratory — an independent, nonprofit marine science institution in Sarasota — was selected to rehabilitate the dolphin. CMA and FWC staff and volunteers immediately transported the dolphin in CMA’s transport vehicle, arriving at Mote around 3 p.m.

The new dolphin patient, being an older male, was nicknamed “Feeny” after the lovable and wise character Mr. Feeny from the 1990s sitcom “Boy Meets World.”

“There is no ‘health insurance’ for marine animals, so having a team like Mote’s can make all the difference,” said Dr. Michael P. Crosby, Mote President & CEO. “Mote's hospitals must be prepared for new patients at all times, much like emergency rooms. The costs of food, medication and medical testing for any one dolphin or whale can total between $600-1,000 per day. We can only do this with the support of our community. We are truly grateful to everyone who supports this important work.”

The dolphin, nicknamed “Feeny,” arrived in very critical condition. As of Wednesday morning, Sept. 23, his condition remains critical but has shown some signs of improvement under the care of Mote's hospital team.

Feeny originally had to be supported for periods of time by caregivers in the water, but for the past 72 hours he has been swimming without assistance. Mote staff recently obtained a more precise weight and found that the dolphin is 436 pounds, which is still considered underweight.

He is eating all the fish that caregivers offer, taking them out of the water himself. Initial examinations and testing on arrival showed he was underweight and dehydrated, and he showed signs of infection, anemia, dehydration and pneumonia as well as other metabolic abnormalities. Caregivers continue to give him fluids and medications, and other tests are still pending, but results so far suggest that further care, monitoring and investigation of his condition are needed.

Feeny remains in critical condition, and monitoring continues. On a positive note, Feeny continues eating all the fish offered, and caregivers were able to successfully raise the water level in his pool and remove human handlers from the water on Sept. 25. The dolphin seems able to swim and support himself without human assistance, and minimizing human contact is ideal for keeping wild dolphins as wild as possible. Mote's goal is to release its animal patients back to the wild.

Blood tests and veterinary examinations show that the Feeny is still anemic and still has signs of pneumonia. The exact reasons the dolphin stranded remain unknown — tests so far have not ruled out the possibility that other health issues are also present.

Feeny continues to swim on his own, and caregivers are monitoring him from above on the deck. He’s interacting a lot with the environmental enrichment devices (EEDs) in his pool.  EEDs are essentially toys designed to provide healthy mental and physical stimulation.  He is also enjoying a “rub line,” a thick rope he can rub against. Dolphins naturally slough their outer layer of skin in the wild, and this rope helps with that.

He has gained 2.6 pounds (1.2 kilograms) of weight, and caregivers have slowly increased his amount of food. Feeny is eating up to 21 pounds of fish, including croaker, herring and capelin – his most to date.

Feeny is still anemic and still has signs of pneumonia, and still has metabolic and inflamation abnormalities that caregivers are monitoring in his bloodwork, but our team is grateful to see that he is responding to care.

We recently made this video about Feeny. Did you know that scientists have seen Feeny many times over the years in the wild? Watch and you’ll learn a little about Feeny’s history, as documented by the Sarasota Dolphin Research Program, which is a collaboration between Chicago Zoological Society and Mote Marine Lab.

Also, we are excited to say that the Gulf Coast Community Foundation's web page, Gulf Coast Gives, is helping us seek donations to support Feeny's care.  Click here to see the page and make a donation this month.  Our goal is $2,000.

Mote Marine Laboratory is sad to announce that Feeny, the adult male bottlenose dolphin that stranded Sept. 17 in Tampa Bay and was transported to Mote to receive critical care passed away Sunday, Oct. 11.

Early Friday morning, Oct. 9, the animal’s health took a sudden downward turn and he was unable to recover. About 1 a.m. Friday morning, he became disoriented and started to lean to one side. Results from ultrasound examinations and blood sample tests revealed that the animal’s blood cells were not regenerating. The animal was also losing weight, which was unusual because of his high-calorie food intake.

Feeny’s cause of death is unknown at this time. Mote staff will perform a necropsy, which is similar to an animal autopsy, to try to determine why Feeny stranded.  The necropsy may not lead to the cause of death and several samples will be collected and sent to various labs for further analyses.  It could take several weeks to months to get a full picture of what led Feeny to strand.

Mote scientists have been pioneering marine aquaponics—farming saltwater fish and plants together in a sustainable, closed-loop system. In fact, Mote has launched an 8,216-square-foot aquaponics farm to demonstrate this exciting sustainable food technology at a scale relevant to commercial farms.