Louie was admitted to the Sea Turtle Rehabilitation Hospital because of a large wound on the back of his neck involving the entire area between his head and his carapace. The wound was cleaned and treated topically. Louie received systemic antibiotics to control infection. The wound healed over about a three month period with no restriction of movement of the head. He was released back into the wild. 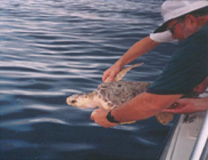 Back to the sea!